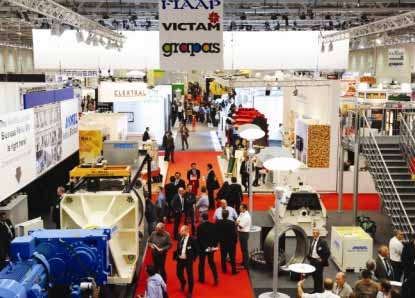 Preparations for FIAAP, VICTAM & GRAPAS Asia 2012 are in full swing despite the flooding that has hit parts of Thailand and Bangkok.

The situation now seems to be improving with flood levels going down throughout Thailand and its capital Bangkok. However, BITEC, the exhibition venue for the shows and conferences, has not been threatened by flooding, nor has Bangkok’s International Suvarnabhumi Airport. Downtown Bangkok, where the majority of the city’s hotels are situated, has also remained flood free. In fact, all the facilities necessary for a successful show have not been affected and are fully operational.
Over the coming weeks the city will dry out and return to its vibrant, welcoming and fun loving self, for which it is famed. With life returning to normal and with still almost two months before FIAAP, VICTAM & GRAPAS Asia 2012 events open, the organizers Victam International expect the event to draw senior trade executives from throughout the animal feed and grain processing industries of South and South East Asia.
The exhibition will be 25 per cent larger than the previous edition in 2010 and is the biggest event by Victam International in Asia yet, according to the organizers.
“There are more exhibitors, larger exhibition stands, more new product launches, more technical conferences. Visitors will find the latest feed ingredients and additives for animals, pets and aqua within the FIAAP exhibitors. If you are looking at animal feed processing technology then Victam is the show for you. The latest machinery and systems from all over the world will be on display. You will be able to touch those gleaming machines and get expert advice from the world’s leading manufacturers and suppliers,” a Victam International official said.
The Victam show will also include many exhibitors that will be displaying the latest technology for biomass pelleting. These organic pellets are used as an alternative source for green energy.
There will also be many exhibitors displaying “ancillary equipment”, for instance silos, conveyors, un/loaders, bagging, buckets, programs, etc. The “ancillary equipment” will also be applicable to the final exhibition – GRAPAS. This show is all about grain and rice milling and processing, its storage, sorting, preservation, transportation and final processing. For visitors from the rice and flour milling sectors, breakfast cereal, noodle and extruded snack producers this show will be a must.
The senior trade executives visiting the event will find a large selection of exhibitors from all over the world that will be displaying ingredients and technology, some being shown in Asia for the first time, that are used in the production of animal feeds and the processing of rice and grains. Companies that supply ingredients and technology to these expanding industries are increasingly seeing the markets increase in importance to them. Companies are now investing more within this market and have realized the importance of this event and so it will be of no surprise then that visitors to the trade shows will see larger exhibition stands displaying the latest innovations within these industry sectors.