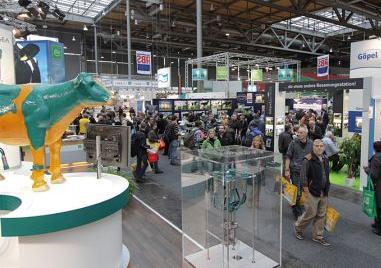 Professional animal husbandry event, EuroTier 2012, which will be held at Hanover from 13 to 16 November, has exerted a hitherto unrivalled draw on manufacturers from home and abroad

The number of exhibitors is around one quarter higher than at the previous record event two years ago. The exhibition area has also grown by an additional six halls to altogether 16 halls and over 24 hectares.

Participation from other countries

The strong growth in the number of exhibitors, with an extra 40 per cent by comparison with the last event, is made up chiefly of international exhibitors. Nearly half the exhibitors hail from outside Germany. The largest contingents of the altogether 1,137 foreign companies come from the Netherlands (193 companies), France (139), China (97), Italy (90), Denmark (85), Spain (68), the United Kingdom (64), Belgium (58) and Austria (57).

Dr. Reinhard Grandke, chief executive officer, DLG, said, “It is notable that distinct increases in numbers have been registered from nearly all countries. DLG understands the high level of international participation to be a distinct signal for the increasing global alignment of companies and agribusiness with its worldwide interlinking. The companies want to use the EuroTier platform specifically for developing new markets.”

He added that the stand booking results are a clear confirmation of the general assessment that good long-term prospects are forecast for agribusiness on the grounds of expected global increases in demand for foods, especially for meat, and for biomass made from agricultural raw materials.

“Manufacturers and suppliers of machinery and equipment, systems and installations and farm inputs for professional animal husbandry are increasingly orienting their innovation cycles to EuroTier in Hanover and showing their innovations for the world market there. This is impressively corroborated by the new record level of over 300 innovations submitted to EuroTier this year.”

DLG expects over 160,000 visitors this year from all over Germany and other countries as well. In addition, many specialists will be travelling from Central and Eastern European countries, mainly from Poland, Russia, the Czech Republic, Slovakia, Hungary, Ukraine and the Baltic countries. In addition, far more advance enquiries regarding visit to EuroTier 2012 have been received from the Middle East and China than was the case two years ago.