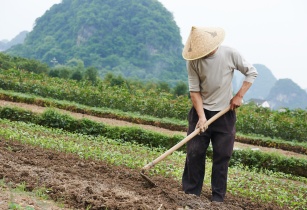 The agreement underlines “China’s effort to prioritise the development of agriculture and rural areas through the ongoing rural revitalisation strategy” and FAO’s mandate in food security and nutrition, agriculture, fisheries, and forestry, “including providing technical assistance to its Members in the field of sustainable development and resilient livelihoods.”

“This is an important agreement, both in terms of synergy between China’s experience and FAO’s priorities and also for China’s continuous contribution to promoting South-South and Triangular Cooperation, to transform agrifood systems and to achieve Better Production, Better Nutrition, a Better Environment and a Better Life for all, leaving no-one behind,” FAO director-general QU Dongyu said.

The overarching goal of Phase-3 of the FAO-China SSC Programme is to support developing countries in achieving sustainable agri-food systems transformation and to contribute to the implementation of the 2030 Agenda and Sustainable Development Goals (SDGs), especially SDG1 and SDG2.

In 2009, the FAO-China SSC Programme was established with an initial contribution of US$30mn for Phase-1, allowing exchanges of knowledge and experience between China and other countries of the global South. In 2015, China contributed an additional US$50mn for phase-2 of the programme.

The FAO-China SSC programme has achieved substantial results to date. Under theflagship South-South and Triangular Cooperation Programme, a total of 25 national, regional, inter-regional and global projects have been implemented to support agricultural development and food security in line with countries’ priorities and needs according to the FAO.

The Programme has reached more than 100,000 direct beneficiaries and several hundred thousand indirect beneficiaries at the grassroots level in rural areas. Chinese experts fielded in host countries have transferred practical and adaptable technologies by providing demand-driven demonstrations and training in collaboration with local counterparts.

In addition to the field projects, more than 50 global capacity development events and activities have been organised with the participation of thousands of government officials, technical experts, small-scale farmers and other stakeholders from over 100 FAO’s member states.

The successful introduction of new technologies through SSTC in many countries has contributed to increased food security, especially through the improvement of agricultural productivity, diversification of food crops, small animal and fish production, and rural incomes.

Over the past two decades, a total of $435 million has been invested in SSTC projects and activities.