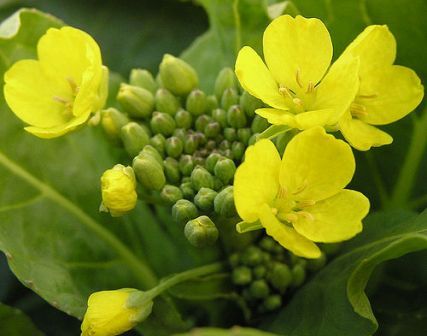 An international team of scientists, funded in the UK by the Biotechnology and Biological Sciences Research Council (BBSRC), has sequenced the genome of a Chinese cabbage variety of a plant called Brassica rapa, a close relative of oilseed rape.

The research, published recently in the journal Nature Genetics, could help improve the efficiency of oilseed rape breeding, as well as that of a host of other important food and oil crops.The project was conducted by an international consortium involving researchers working across four continents, with the majority of the data generated in China. The UK's contribution came from scientists at the John Innes Centre in Norwich and Rothamsted Research in Hertfordshire, both of which receive strategic funding from BBSRC.

Oilseed rape is an important source of vegetable oils for cooking and industrial applications and its production has doubled in the last 15 years. It is an unusual hybrid which contains the entire genomes of two other plants: Brassica rapa and another closely related species called Brassica oleracea. By sequencing Brassica rapa, researchers are able to access half of oilseed rape’s genes without having to wrestle with its large and complicated genome.

Professor Ian Bancroft led the research at the John Innes Centre. He explains: "Oilseed rape is the second most important oil crop in the world and the most important in Europe. Sequencing its genes will provide breeders with the tools to improve the efficiency of developing new varieties, but this is difficult because it has a really complicated genome. Thankfully, because it is a hybrid, nature has already divided up the oilseed rape genome into two more manageable chunks, one of which we have now sequenced."

Brassica rapa and oilseed rape are both brassicas, a group which also includes broccoli, turnip, sprouts and cabbages. Together, this important group of plants accounts for more than 10 percent of the world's vegetable and vegetable oil production and, despite their apparent diversity, they are all closely related. This enables scientists to apply the insights they gain by sequencing one species, such as Brassica rapa to improving the breeding efficiency of a range of crops essential to ensuring global food security.

Professor Bancroft continues, “Few people would confuse a turnip with a cauliflower and yet, despite coming in a range of shapes and sizes, brassicas are all very closely related. This means that the many of the 41,000 genes which we found in Brassica rapa will also be found in other brassicas and the insights we gain from having this sequence could be useful for improving everything from plants grown to produce chainsaw oils to the sprouts on your Christmas dinner.”

The Brassica rapa sequence was produced using a technology which breaks the DNA into small segments before reassembling the complete genome. Throughout its evolution Brassica rapa has triplicated its genome meaning that the task of assembling the final picture posed a particular challenge to the scientists and the technology.

Professor Douglas Kell, Chief Executive of the Biotechnology and Biological Sciences Research Council, said: “Plants have a tendency to multiply their genomes as they evolve. This means that many important agricultural crops like wheat, potato and oilseed rape have much larger and more complex genomes than most animals, including humans.”

“Helping breeders produce new varieties of these staple crops will be essential to ensuring our future food security, so scientists must use their ingenuity to find ways to overcome the challenges posed by these massive genomes. This research shows what can be achieved by applying the latest technology and by combining the expertise of scientists across the world.”