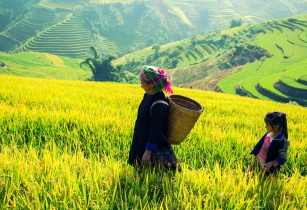 The pilot activity will directly benefit about 500 farmers, including women, and will indirectly benefit the other 2,500 people in the project target locations. (Image source: Adobe Stock)

The activity took place with the participation of MARD Minister Le Minh Hoan, the Ambassador Extraordinary and Plenipotentiary of Ireland to Vietnam John McCullagh, FAO’s Representative to Vietnam Rémi Nono Womdim, Chairman of the Tuyen Quang Provincial People’s Committee Nguyen Van Son, representatives from different departments of MARD, along with Provincial Departments of Agriculture and Rural Development of all the 63 provinces nationwide.

The pilot activity funded by the Government of Ireland through the FAO will be implemented during the period 2022 - 2023, with a total budget of US$104.145. The activity aims at increasing access to resilient and sustainable agriculture value chains for disadvantaged women in the northern mountainous region, contributing to address the food insecurity and malnutrition through empowering and engaging ethnic minority women in the agriculture value chains and businesses.

“In any agri-food value chain, the most important factor is seed, followed by production techniques, harvest, processing and distribution. Planting is surely undertaken by farmers. Once all the stages are standardised, the final product will meet the standards. Connection throughout the chain is crucial, without which the chain may be broken. Each stage of the value chain has to bring added value, and this is the true mind-set of economists,” said Minister Le Minh Hoan.

Therefore, with the human-centered approach, the pilot activity will directly benefit about 500 farmers, of which women and extension workers accounts for at least 50%, and will indirectly benefit the other 2,500 people in the project target locations.

“Women are the backbone of food systems. Globally, they represent 45% of the agricultural work force, and this number goes up to 60% in some countries in Africa and Asia. Yet, women in agriculture do not have the same opportunities as men,” said Rémi Nono Womdim, FAO’s Representative to Vietnam. “With the support of the Government of Ireland and in partnership with the MARD and other stakeholders, FAO will provide technical assistance to enhance the provision of extension services and business support for women. The pilot activity will promote the One Commune One Product (OCOP) strategy, by supporting the development of high-quality and sustainable value chains,” he added.

In his speech at the launching event, Ambassador Extraordinary and Plenipotentiary of Ireland to Vietnam John McCullagh explained, “Vietnam is a country with huge potential. As a world leader in food and agriculture, Ireland wants to share its experience to build capacity in Vietnam and to promote inclusive economic growth. We are working closely with MARD to put a multi-annual capacity building programme in place. Ireland has also been working for many years to support ethnic minority communities. This important initiative in Tuyen Quang Province is a good fit with our work on both fronts and we hope it will make a positive difference to the lives and livelihoods of the communities involved”.

The outcomes of this pilot activity is expected to be collected and documented to be widely shared and developed into a programme for the expansion of the project success models to other provinces in the northern mountainous region facing the same challenges, such as Lai Chau, Dien Bien, Son La, Lao Cai, Hoa Binh and Yen Bai, contributing to Vietnam’s national strategies and programmes.