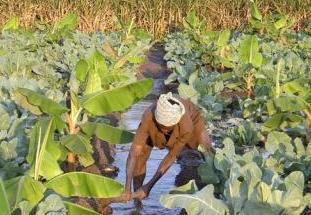 As food prices escalate globally, a new study finds that small-scale irrigation schemes can protect millions of farmers from food insecurity and climate risks in sub-Saharan Africa and South Asia

The report, ‘Water for wealth and food security: Supporting farmer-driven investments in agricultural water management’ has been released by International Water Management Institute.

According to the report, expanding the use of smallholder water management techniques could increase yields up to 300 per cent in some cases, and add tens of billions of US dollars to household revenues across sub-Saharan Africa and .

“We’ve witnessed again and again what happens to the world’s poor - the majority of whom depend on agriculture for their livelihoods and already suffer from water scarcity -  when they are at the mercy of our fragile global food system,” said Dr Colin Chartres, director general of IWMI.

“However, farmers across the developing world are increasingly relying on and benefitting from small-scale, locally-relevant water solutions.”

The assessment quantified the potential reach and possible additional household revenue for a number of different on-farm and local community water solutions.

The three-year AgWater Solutions Research Initiative unearthed for the first time the scale at which enterprising smallholder farmers themselves are driving this revolution by using their own resources innovatively rather than waiting for water to be delivered.

“We were amazed at the scale of what is going on,” said IWMI official Meredith Giordano, who coordinated the initiative. “Despite constraints, such as high upfront costs and poorly developed supply chains, small-scale farmers across Africa and have moved ahead using their own resources to finance and install irrigation technologies. It’s clear that farmers themselves are driving this trend.”

Partners in the AgWater collaboration believe the implications of the work could be profound, especially for donors and private investors committed to boosting incomes and livelihoods in the world’s poorest countries by improving farmer access to water resources.

The research - a collaborative effort involving several international and national partners and funded by the Bill & Melinda Gates Foundation – provides the best evidence to-date on the scale and potential economic benefits of smallholder water management in sub-Saharan Africa and South Asia.

Experts believe that improving water management capabilities could unleash smallholder farming and it could become a major driver of economic growth, poverty reduction and food security.