IRRI calls for ban on certain insecticides in rice production 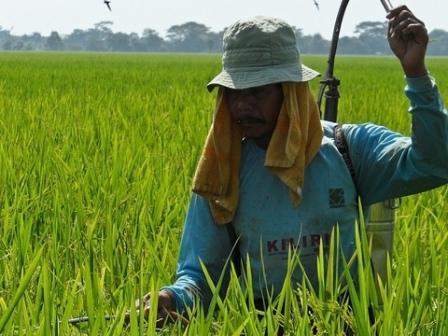 To prevent devastating insect pest outbreaks in rice that cause millions of dollars of damage, the International Rice Research Institute (IRRI) has called for a ban on certain insecticides in rice production as part of its new Action plan to reduce planthopper damage to rice crops in Asia.
At a conference in Hanoi, Vietnam, IRRI brought together leaders in the rice industry to advance towards a “greener game plan” to manage brown planthoppers, which, without exaggeration, are one of a rice farmer’s worst fears.

“We need to seriously rethink our current pest management strategies so we don’t just cope with current outbreaks, but prevent and manage them effectively in the long run,” says Dr. Bas Bouman, head of the Crop and Environmental Sciences Division at IRRI and leader of the Global Rice Science Partnership (GRiSP) program on sustainable production systems.
“At the conference we engaged policymakers, agricultural scientists, researchers, extension workers, and the private sector that have a direct stake in Vietnam's agricultural industry and can make a positive contribution to a long-term planthopper management strategy,” said Dr. Bouman.
Considered a major scourge in rice-producing countries, planthoppers in large numbers cause considerable damage by sucking sap from rice plants, causing them to wilt and die. They also transmit three viral diseases that stunt rice plants and prevent grain formation.
“Planthopper outbreaks occur when there is a breakdown in ‘ecological resilience’ of a rice farm,” explains Dr. K.L. Heong, an insect ecologist at IRRI.
“Beneficial predators such as spiders and bugs that feed on planthoppers are part of a natural system of ‘checks and balances’ that keeps planthopper populations below outbreak levels,” he added. “When this natural balance is disrupted, however, planthopper outbreaks occur.”
Many beneficial insects that prey on planthoppers are killed inadvertently when insecticides are misused or are used indiscriminately. Also, growing three rice crops a year or using the same varieties over a large area and for a long period can lead to pest outbreaks due to the adaptation and buildup of pest populations.
The Action plan recommends two major principles – first to enhance biodiversity and second to regulate the marketing and use of insecticides, including the banning of certain outbreak-causing insecticides in rice.
With IRRI’s support, just three months ago, Thailand banned the use of two insecticides in rice – abamectin and cypermethrin – because they are known to be major causes of planthopper outbreaks.
Also, in March this year, the Vietnamese province of An Giang started adopting ecological engineering practices such as growing flowers in nearby paddies to nurture planthopper predators.
"It’s a first step and there’s a lot more to go, but openness to change is nothing new to Vietnam,” cited Dr. Heong.
The country, having seen dramatic changes in its rice production over the last 26 years, went from being a struggling rice importer to becoming a strong rice exporter now by adopting a country-wide reform policy called “Doi Moi” in the late 1980s. Doi Moi was the underlying force behind Vietnam’s rice success today, and it literally means “change and newness.”
Willingness to embrace change has also been the reason behind the success of two campaigns by IRRI and the Plant Protection Department (PPD) of Vietnam in 1994 and 2003 to better manage rice crops and rice pests. “No Early Spray” and "Three Gains, Three Reductions" won several awards from different organizations and became renowned models for participatory learning in agriculture.
“With the two leading rice-exporting countries, Thailand and Vietnam, showing such leadership in better pest management, we remain optimistic that, in the future, planthopper outbreaks will lessen in their frequency and severity,” Dr. Bouman concluded.
The international conference Threats of Insecticide Misuse in Rice Ecosystems – Exploring Options for Mitigation, was held on 16 December 2011 in Hanoi, Vietnam.