China meat market is growing at a high CAGR because of the increasing health-consciousness among consumers. Additionally, growing trade activities for meat in the country to fulfil the growing demand is favouring market growth, according to BlueWeave Consulting 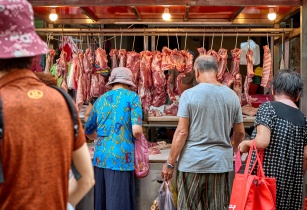 The growth of the Chinese meat market is fuelled by increasing disposable income and the availability of a wide range of fresh meat. (Image source: Adobe Stock)

A recent study conducted by the strategic consulting and market research firm, BlueWeave Consulting, revealed that the China meat market is estimated to grow at a CAGR of 5.9% during the forecast period of 2021-2027. The Chinese meat market is growing at a high rate because of the increasing disposable income spurred by its economic growth and the availability of a wide range of fresh meat. Presently, Chinese consumers have greater access to meat with a wider range than ever before.

It is estimated that Chinese consumers consume 30% of the world's meat with pork being the most popular. The country invests handsomely in expanding its pork production to meet the growing domestic demand with meats like veal slowly gaining popularity. Additionally, the country is focusing on boosting trade activities to meet the demand, keeping in mind, the increasing popularity of vegan meat is anticipated to act as a major restriction for market growth.

Chinese cuisine is a major attraction for tourists, as it is considered an essential part of experiencing local culture. The demand for meat is, therefore, expected to increase thanks to international travellers. Consumption is primarily fueled by on-trade channels such as hotels, restaurants and street vendors, to boost the growth of China's meat market.

In terms of producing, consuming, and importing meat, China leads the world. The country is significantly investing in meat import and export activities to fuel domestic meat consumption. The United States, France, Denmark, Spain, Canada and Germany are among the major pork importers of China. Additionally, China is also welcoming other countries like Pakistan to export meat into the country in partnership with approved meat production facilities.

Based on categories, the Chinese meat market is grouped into on-trade and off-trade segments. The off-trade segment is further classified into supermarkets/hypermarkets, speciality, online among others. The supermarkets/hypermarkets segment accounts for the largest market share owing to the availability of a wide range of meat types under one roof. The on-trade segment also covers a substantial share in the market due to flourishing tourism and high consumption of meat through hotels, restaurants, and street food vendors.

The COVID-19 outbreak negatively impacted the growth of the China meat market according to the study.  Several meat processing plants and wet markets were temporarily closed due to the Coronavirus that was believed to have originated from China via bat meat for human consumption. In addition, the cases of other emerging zoonotic diseases made consumers reluctant to consume meat. Moreover, the disruptions in supply chains also led to a shortage of frozen meat products affecting the market growth.

The market is said to be highly fragmented, due to the presence of several industry players engaged in processing, import and export activities. The market players constantly focus on offering a wide range of meat types and often launch new meat products to cater to the changing consumption pattern. They also work on improving the distribution channels by establishing partnerships with on-trade channels, such as hotels and restaurants and supermarkets, to increase their product penetration and expand their market revenue. Furthermore, the adoption of competitive strategies, such as partnerships, mergers, acquisitions, joint ventures is also prominent.