‘Agriculture plays a key role in growth of urban areas’ 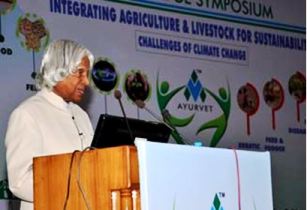 Growth in agriculture production with value addition will not only increase the per capita income of farmers, but also support increasing need of food and raw materials in the urban sector, according to former president of India

Dr A P J Abdul Kalam said, “Enhancing agriculture productivity is the key for agro-food processing and related industrial, manufacturing and service sector growth. Globally agriculture is the predominant industry than any other industry.”

At the recently held Ayurvet Knowledge Symposium 2014 on Integrating Agriculture and Livestock for Sustainability, he further added that agriculture has a key role in reducing poverty since three billion people live in rural areas and are largely dependent on agriculture, while food process determine the cost-of-living for the urban poor.

The Knowledge Symposium 2014 was organised by Ayurvet Research Foundation in collaboration with Indian Council of Agricultural Research (ICAR) and Rajasthan University of Veterinary and Animal Sciences (RAJUVAS).

Dr Kalam noted, “Livestock rearing in India is quite different for subsistence farmers, where risk management is more important than the developed market driven systems.

Apart from climatic conditions, we have problem of large human and animal population, pressure on land, scarcity of pastureland, shortage of feed and fodder, resulting in comparatively low productivity and consequently the low economic returns.”

While appreciating the contribution of Indian poultry industries, the former president also noted that poultry farming in India has transformed from a mere tool of supplementary income and nutritious food for the family to major commercial activity generating the required revenue.

He expressed his concern for the shortage of quality feeds and suggested increasing the supply of green herbage, conservation of degraded pasturelands and development of wastelands strategies are needed.

Pradip Burman, chairman at Ayurvet Research Foundation, also presented a brief account of R&D preparedness of Ayurvet Research Foundation to face the future challenges. He said that livestock are closely linked to the social and cultural lives of several million resource-poor farmers, for whom animal ownership ensures a degree of sustainable farming and economic stability.