Agritechnica 2015: What to expect 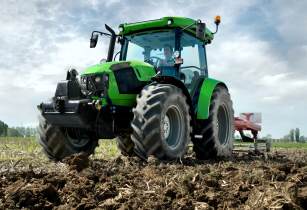 Agritechnica 2015 is fast-approaching with exhibitors keen to present their new products to the agricultural industry at Deutsche Messe Hannover, Germany from 10-14 November 2015

Far Eastern Agriculture was present at the show preview, which was held at the Hannover Convention Centre.

New Holland
The T7 Heavy Duty tractor from New Holland will be launched in 2016, with two new models – the T7290 and the T7315 – on display at Agritechnica this year. T7 tractors offer New Holland’s ECOBlueTM SCR technology for Tier 4A compliance, providing up to 19 horsepower more power and 139Nm of torque over the existing T7000 range. With Engine Power Management, up to 51hp extra is available for maximum productivity.

Klaus Senghaas at New Holland told Far Eastern Agriculture, “We also have CR combines – twin rotor combines – which we launched last year. We are launching some new engines for this CR combine, we also need Tier 4 final standards for the CR.”

John Deere
John Deere has expanded its range of mid-size 6R and 6M Series tractors, with now a total of 14 new four-cylinder and large frame six-cylinder models with Stage IV/Final Tier 4 engines from 110 to 195hp to replace the current Stage IIIB/iT4 compliant models.

While the 6R is readily available, the 6M will be on the market from November 2015. These enhanced tractors feature better manoeuvrability, enhanced operator comfort, a wide choice of transmissions and the option of up to six SCVs. The new 6R Series four-cylinder premium tractors feature 4.5-litre John Deere PowerTech PSS engines. The six-cylinder versions, however, are equipped with 6.8-litre John Deere PowerTech PVS engines. All new 6R Series tractors are installed with John Deere’s intelligent power management system (IPM), which adds 15 to 31hp on the four-cylinder models and 47hp on the six-cylinder versions.

Lemken
The Azurit precision seeder was presented as a prototype at Agritechnica 2013 and now the company has launched the pre-production machine of its blue Azurit, which follows the ‘DeltaRow’ concept. The DeltaRow system clearly differentiates LEMKEN technology from traditional approaches, in which seeds are placed in single rows. The team at LEMKEN have opted for two staggered twin rows spaced 12.5 cm apart. This enables individual plants 70 per cent more surface area for growth and provides better access to water and nutrients. The Azurit allows maize, soya beans, sunflowers and rapeseed to grow with great precision and efficiency at forward speeds of up to 15 km/h.

Other agricultural machinery on offer from JCB include compact backhoe loaders and telescopic handlers. According to Chell, JCB’s small compact backhoe - the 2DX - is 50hp, which he noted has become increasingly popular.

JCB recently announced that it will also unveil new developments to its Loadall range at Agritechnica 2015. The company’s agriculture managing director Richard Fox-Marrs said, “Agritechnica is a key date in the industry calendar and we are delighted to be showing some of the innovative developments to our Loadall product, which is the world’s biggest selling agricultural telescopic handler.”

Same Deutz Fahr
SAME offers the Frutteto family with a new front axle suspension system with independently sprung wheels. Although this is a technological system usually seen only on higher horsepower tractors, SAME has now brought to its specialised smaller tractors for fruit orchards and vineyards.

Providing farmers with a comfortable driving position, it features two hydraulic cylinders, a system allowing the suspension arms to pivot unassisted on the front and a suspension carrier. A speed sensor, a steering sensor and three nitrogen accumulator tanks also contribute to driver comfort and vehicle stability whether working in the field or driving at high speed on the road.