Animal health and nutrition to be focus of VIV Asia 2013 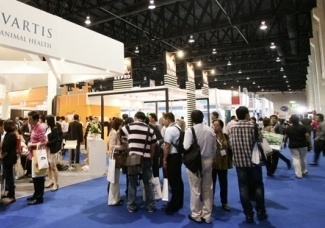 With people from over 100 nationalities expected to visit VIV Asia 2013 in Bangkok, the organisers of VIV events worldwide – VNU exhibitions – hope that the event will be a meeting point for investors and innovative suppliers in the livestock industry.

Spread over 5,000 sqm of area for exhibition and more than 500 exhibitors participating in VIV Asia 2013, the event is poised to be an ideal platform for industries pertaining to animal production and meat processing in the Asia-Pacific region.

Apart from these, other exhibitors of the event will be from the knowledge transfer sector and consultancies, feed ingredients and additives. The event will also provide an opportunity for visitors to meet professionals and avail the facilities provided by the many exhibitors.

Companies like ACG Products, Bayer Thai, Bellaghy Pedigree Pigs, BIOMIN GmbH and many more will be participating in the event according to the event organisers.

The biennial event presents the entire ‘Feed to Meat’ supply chain and offers plenty of opportunities for the supplier industry. After the resounding success of the last edition of the event, this year too the organisers hope that VIV Asia will play a significant role in the continuing growth of intensive livestock farming in Asia’s emerging markets.

VIV Asia will be organised with three special features. First, Croptech-Feedtech Asia 2013 will be dedicated to the Asia-Pacific feed milling industries. Second, a brand new theme at VIV Asia 2013, MeatTech Asia 2013 will present international suppliers and technologies in slaughter and process of pig and poultry meat. Third, the VIV Animal Health Summit Asia will be arranged as a special theme at the 2013-edition of VIV Asia and will return at VIV Europe 2014. Conferences, innovations and an award ceremony will be addressed in this third feature.

The positive feedback was also evident from the number of exhibitors that signed up for the next installment of VIV Asia in 2013; a third of the participants confirmed their space at VIV Asia 2013.

During the three-day event, visitors were able to connect with exhibitors from 46 countries, active in different segments from Feed to Meat. Special themes, product presentations and an extensive conference programme ensured visitors stayed at the cutting edge of their profession.

In addition to VIV Asia 2013, Aquatic Asia 2013, which will be held in co-location. The event is designed as a trade show for the Asia-Pacific aquaculture business, focusing on the research & development, production and marketing of fish & shrimps.