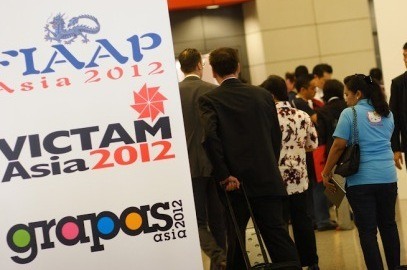 More than 6,000 visitors from about 70 countries flocked to the BITEC exhibition centre in Bangkok to explore the latest products and solutions for the feed and grain industry, registering an increase of 10 per cent compared to the previous edition in 2010.
The exhibition area was 40 per cent larger and had more exhibitors than the previous shows. About 30 new products were launched at the event. Technical conferences and seminars too evoked overwhelming response.
“Once again quality was the buzz word. The visitors described the exhibits as high quality, the exhibitors said the same for the visitors…and delegates also appreciated the quality of the conferences,” organisers said.
The exhibitions co-located with the VICTAM show also proved popular.
“The GRAPAS expo, the event for grain processing, rice and flour milling, brought in new visitors and 48 per cent of the visitors showed interested in the GRAPAS exhibitors.
“The FIAAP exhibition, the show for feed ingredients and additives, attracted a lot of attention with 52 per cent of the visitors looking for ingredients and additive products. A large number of these visitors expressed interest to see more ingredient and additive suppliers at the 2014 exhibition.”
The show organizers have announced that their next event will be held again at BITEC.
“Visitors and exhibitors have all agreed that the new home of the event, BITEC was excellent. About 95 per cent of the exhibitors stated that they will exhibit again in 2014. Of the visitors also 95 per cent said that they would come again in 2014.”