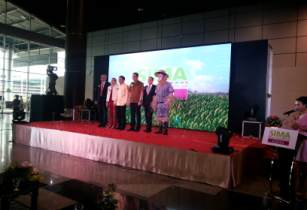 Delegates and visitors from across the world are in Bangkok to attend the show, and there is much curiosity over what the exhibitors have to offer. The opening ceremony was a grand one, and presented warmly by the host country. The delegates included Pornphan Bulner, director of Impact Exhibition Management; Valerie Lobry-Granger, managing director of the agriculture and food division of Comexposium; Alain Savary, general manager of AXEMA, Sylvian Fourrierre, first counselor of the French Embassy to Thailand; Nopparat Maythaveekulchai, president of the Thailand Convention and Exhibition Bureau (TCEB); Hiroshi Kawakami, president of SIAM Kubota Corporation Co., Ltd; Michael Gause, director of sales and marketing, John Deere Asia and Wimol Jantarothai, acting permanent secretary of the Thai Ministry of Agriculture and Cooperatives.

Bulner opened the ceremony with her comments on how it was a moment of pride for Thailand to host the first ever SIMA ASEAN, and that the show would highlight the importance of agriculture for the sustenance of the human race.

The representation of France was rather prominent, considering SIMA is primarily a France-centric agri-business show, but the French delegates revealed that they were exploring options to make their show international. Fourierre added that when the organisers were deciding where to host the Southeast Asian edition of SIMA, Thailand emerged as the unanimous choice. "Thailand is the agriculture hub of Southeast Asia. Some of the biggest French companies like Forges De Niaux and Gregoire Besson are here to showcase their offerings to the local consumers."

AXEMA represents around 90 per cent of the French agriculture and related markets, added Savary. But the time was right to move to other potential markets and the organisers had Middle East and Southeast Asia as regions that they could explore. "Thailand is an obvious choice for many reasons - there are reliable local partners who can deliver and promote shows well. Besides, the future is bright for agriculture machinery and I'm sure that the first edition is going to be part of a series of many successess."

The feelings were echoed by the Thai delegates as well. Maythaveekulchai said, "One of our major reasons to support SIMA was to drive international participation into our markets. Thailand thrives on agriculture and the time is ripe to take the sector to the next level." Being a leading producer and exporter of products such as rice, cassava, sugarcane and rubber, Thailand's farmers are seeking ways to improve their productivity, reduce costs and downtime and enhance mechanisation. These reasons made it an exciting challenge for major machinery manufacturers such as John Deere and Siam Kubota, among others. Kawakami said, "Kubota products have supported the Thai markets for more than 40 years. The rice production in Thailand is among the highest in the world, surpassing levels produced by China and India. We are ready to provide specialised solutions for the local market and have a dedicated team that's working in tandem with the needs of the ASEAN region."

SIMA ASEAN 2015 will witness several machinery and agri-solutions providers in Halls 1 and 2 at the Impact Exhibition Center. In addition, the Innovation Zone and a series of conferences are expected to provide a comprehensive idea of the markets to the attendees.