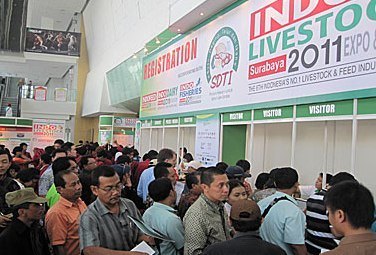 Indo Livestock Expo, held at the Jakarta Convention Center, from 4 to 6 July, 2012, brought together trade buyers representing farmers, meat and egg processors, importers and distributors to view the latest technology and network

Hosted by the Direcorate General of Livestock and Animal Health, Ministry of Agriculture of Indonesia, over 400 exhibitors from 40 countries including Indonesia and the ASEAN region participated in the seventh edition of the expo.
The largest livestock exhibition in Indonesia was officially opened by the Indonesian minister of agriculture, Ir. Suswono, MMA.
"Four countries and regions namely China, Singapore, Indonesia and Europe set up their own pavilion during the event," said Herman Wiriadipoera, president director of PT Napindo Media Ashatama.
"Like every year, since the inception of the programme in 2008, we have focused on the community at large and the consumer’s need to buy nutritious food. This year, the response from exhibitors has been better than last year. Infact, this has been the largest turnout in the history of the event.”
PT Napindo Media Ashatama, the organiser of the feed, dairy and livestock industry show organised a number of activities such as seminars, workshops, dialogues etc. The faculty of animal science department of Bogor Agricultural University (IPB) presented a seminar on animal industry titled ‘Empowering local resources for sustainable animal production in adapting to climate change’.
Other discussions included ‘Assuring Food Safety and Animal Origin Products’, a workshop on local poultry by the Poultry Science Association and Livestock Research and Development Centre, ‘Socialisation for Licensing for Inflowing and Expenditures Livestock and Livestock Products’ by the Directorate General of Livestock and Animal Health, Ministry of Agriculture and ‘Socialisation of Animal Quarantine Policy’ by the Quarantine Agency, Ministry of Agriculture. More than 100 technical product presentations were given for the benefit of visitors informing them about the various products of the livestock industry.
Shows on nutrition, a cooking demonstration and competitions were organised to make the event more engaging.
Indo livestock 2013 is slated to be held in Bali.