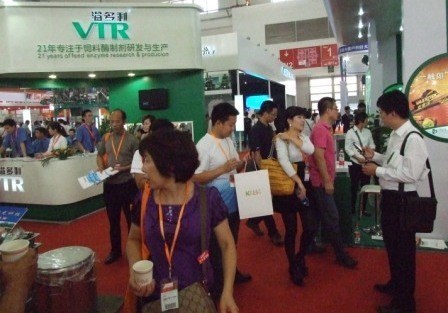 Good genetics are key to good output and hence many countries are keen to export breeding pigs to China. The National Swine Registry promoted American genes at the show, along with French companies. Dutch breeding company Topigs and the British also promoted their bloodlines.

A new francise agreement was signed along the sidelines of VIV China between UK’s largest pig breeding company JSR Genetics and Tainjin Bo Hui Rui Kang Livestock Breeding Ltd for 900 GGP gilts and boars scheduled for delivery in May 2013.

Managing director of JSR Genetics Grant Walling commented that he was asked far more technical questions about breeding techniques than at the last VIV China held two years ago.

Robert Overend, a breeder of top quality breeding pigs in Northern Ireland said, “Exporting live pigs is very expensive because of high shipping and vet costs so for my business frozen semen is the way forward.”

French company IMV that exports their AI equipment worldwide were also exhibiting their products and commenting on the scope of insemination in China said both traditional and deep insemination catheters were popular with Chinese producers, although semen bottles were preferred to blister packs. Continuing with the breeding theme, many companies exhibited small compact scanners, used for pregnancy checking sows and gilts.

It was impossible to miss the Buhler stand with its impressive display of feed milling and processing equipment. A number of feed manufacturers were present at the show along with many Chinese companies selling synthetic amino acids, vitamins and minerals.

Antibiotic growth promoters are banned in the EU and it was very significant to see some Chinese companies selling acidifiers and more natural forms of growth promoters.

Due to a variety of factors feed raw materials are currently in short supply in China as in most other countries.

Lu Nan, manager of Olmix in China quoted per tonne prices of corn (maize) at £220-270, wheat £270, 45 per cent of CP soya at £460-470 and fishmeal at £1000. Chinese producers can make the most of such prices and take advantage of the superior imported genotypes now available to them, as only pigs with superior liveweight gain and FCR will leave producers in profit.

With the successful conclusion of VIV China, the next edition of the event to be held from 23 to 25 September 2014, in Beijing, can only be expected to draw a bigger crowd, reflecting the increase in size of the Chinese livestock sector as it grapples with the challenge of producing more meat and eggs to feed the ever growing Chinese population