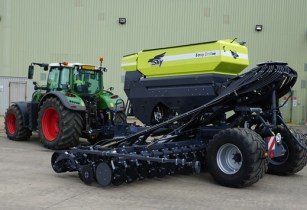 Following the success in UK and across Europe of the three, four and six metre EasyDrill, Sky Agriculture has introduced an eight metre model into the range

This will be on show for the first time in the UK at Cereals Event 2021.

Glenn Bootman, product manager for SKY in the UK, said, “The 8m EasyDrill delivers for the larger acreage farm, where higher HP tractors are generally available from previous crop establishment systems. The additional width allows a higher work rate for this most versatile of drills.”

The main hopper is split between grain and fertiliser each with their own pneumatic distribution. In addition, the option of up to two separately metered PRO hoppers can be integrated so that seed or microgranules can be introduced via either distribution circuit.

“The ability to seed from four hoppers at once allows so many possibilities e.g. mixed cover crops/companion cropping/small seeds/slug pellets to be added as desired. It also combats the risks of seeds of different sizes settling out in the hoppers.” Bootman remarked.

The eight metre drill is ISOBUS ready and supplied as standard with Sky’s Quartz 800 control box. However, E-Drive premium can be specified which offers left and right section control as well as electronic row shut off for each individual outlet, meaning that the drill can be set to seed with a number of row configurations from the touch of a button. This ability to shut off individual rows also means that whatever the width of the sprayer or spreader it no longer needs to be a multiple width of the drill. This function allows farmers and contractors to change sprayer/spreader width without having to renew the drill.

With row spacings of 16.6cm, the eight metre drill services 48 coulters each with seed and fertiliser outlets. 250kg coulter pressure provides the versatility to drill straight into hard stubbles, cultivated soils and direct and through cover crops. An additional feature of the coulter line is the ability to transfer weight hydraulicly between the front press wheels and the rear press wheels. This feature comes into its own when, under damp and /or loose soil conditions weight is transferred onto the front press wheels and in dry seeding conditions the weight can be moved to the rear press wheel for improved slot closing.

Typical working speed is between and six and 12km/hour depending on conditions. The drill weighs in a touch under 10 tonnes with a transport width of three metre. Loading height is 3.2m