Paving the way to climate neutrality 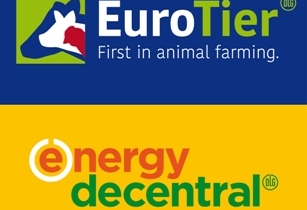 EnergyDecentral, which is scheduled to take place in parallel with EuroTier from 15 -18 November 2022 at the trade fair grounds in Hanover, will show how regenerative energies are paving the way to a climate-neutral future

Farmers play a central role in achieving net zero greenhouse gas emissions and limiting global warming since farming is responsible for around 20% of worldwide CO2 emissions. With tailored solutions consisting of seed and innovative crop protection agents as well as solutions for digital farming and fertiliser management, they can specifically reduce CO2 emissions, bind carbon in the soil and gear their farms to meet the requirements arising from climate change. All of these agricultural methods are being bundled under the term ‘carbon farming’. These activities are focused on soils, which are able to bind vast quantities of carbon when they are managed sustainably.

Besides reducing CO2, discussion surrounding the climate at EuroTier will increasingly be concerned with methane (CH4). After carbon dioxide, this gas is the second most significant driver of global warming and is regarded as being considerably more harmful to the climate, since its greenhouse effect is around 25 times higher. Solutions for reducing methane will be presented at the DLG ‘Milk & Cattle’ Forum. Experts will be expressing their opinions on current issues in milk production and cattle farming and will also be touching on aspects of climate protection.

One sensible option to reduce methane emissions is to use biogas plants to consistently convert residues from cattle farming into energy. The increased fermentation of slurry is not only able to reduce greenhouse gas emissions from livestock management, but can also deliver renewable energies at the same time. In terms of the energy revolution and the efforts being made to achieve climate neutrality by 2050, this is a critical factor. The exhibitors at EnergyDecentral will be presenting exactly how this works.

The feed and the way in which feeding is carried out also makes a substantial contribution to minimising methane emissions. Added to this equation are special feed additives which work by inhibiting the enzymes responsible for methane synthesis in the intestine. ‘Bovaer’, a feed additive for cows and other ruminants that has been developed by Dutch company DSM, also relies on this mechanism of action. It is the first ever feed additive approved in the EU that has a provenly positive impact on the environment by influencing methane emissions. Arla Foods has been testing the feed additive in the context of a pilot project involving a total of 10,000 cows. If the initial results meet expectations, the company is planning to extend the pilot project to 20,000 cows in 2023.

Another topic on which applied research is focusing at an international level is algae. They, too, may help to improve the carbon footprint of cattle breeding in the future. Research shows that, depending on the level of their content in fattening cattle feed, red algae reduce methane emissions by up to 80%.

Also, Dinitrogen oxide (N2O), commonly known as laughing gas or nitrous oxide is considered to be almost 300 times more harmful to the climate than carbon dioxide and is produced when nitrogen is converted in the soil. Reduced-nitrogen feeding methods such as those on the agenda in the DLG Spotlight ‘Feed for Future’ are therefore a key lever for reducing nitrous oxide emissions. The objective is the achievement of high nitrogen efficiency with low N balances, because the lower the balance surpluses are, the less nitrate leaching that occurs..

The greatest potential however, is promised by low-emission fertilisation that is geared to the crop’s needs, since it avoids nitrogen surpluses and therefore nitrous oxide emissions from agriculturally used soils. The extent to which synthetic nitrogen can be replaced, at least in part, by nitrogen from sustainable sources will be dealt with in the DLG Spotlight ‘Feed for Future’. Besides the use of organic fertilisers, the cultivation of nitrogen-fixing legumes will also be discussed at the event.