Thailand to host SIMA 2016 in September 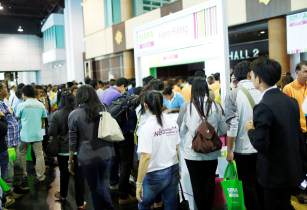 Organisers of SIMA ASEAN have announced SIMA 2016, which is set to take place between 8 and 10 September 2016 at the Impact Exhibition Center, Bangkok

The first edition of SIMA ASEAN concluded at the Impact Exhibition Center in Bangkok on 19 September 2015, with organisers emerging pleased with the turnout and response. The show was organised by France’s Comexposium and Thailand’s Impact Exhibition Management Co., Ltd.

Pornphan Bulner, director of Impact Exhibition Management Co., Ltd, said, “Agriculture is the basis on which the human race thrives. We are proud to have presented this show, and we promise to bring more advanced solutions next year.”

Spread across two halls at the Impact Exhibition Center, there were more than 300 companies present at the show. Major agriculture solutions providers showcased some of their trademark products while others utilised the SIMA platform to launch new products.

John Deere launched the 3036E tractor for the Thai markets, while Kubota showcased its Smart Agri System for its range of products. French company Manitou showcased its new product, the MLT X-625, at its stall. American manufacturer Kuhn had the HRB series on display at its stall.

Organisers have already announced that the second edition of SIMA ASEAN will take place at the same venue next year, from 8 to 10 September 2016, with an anticipated 15,000 plus visitors set to attend the show. They are expecting 350 companies to be present at the show, ranging from agricultural cooperatives, machinery traders, product distribitors, supply shops, agricultural organisations, buyers, distributors, agents, CEOs, chief engineers, farmers, government bodies and many more.