Investing in infrastructure for aquaculture development 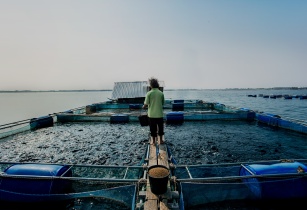 The Department of Agriculture (DA), Philippines, has announced investments towards aquaculture related infrastructure worth approximately US$450,000 at the Southeast Asian Fisheries Development Centre (SEAFDEC) in Iloilo city

The investments are poised to boost aquaculture activities in the country through new broodstock and hatchery facilities at the SEAFDEC in Tigbauan, Iloilo. New facilities will include a multi-species marine hatchery, multi-species freshwater hatchery and milkfish broodstock tanks and were inaugurated by agriculture secretary William D Dar.

SEAFDEC chief Dan D Baliao said the structures would serve as model facilities for the multi-species hatcheries that will be built in the future under the "Fry Sufficiency Program” which they will undertake together with the Bureau of Fisheries and Aquatic Resources (BFAR).

“These facilities were built to intensify demonstration and technology transfer programmes of SEAFDEC/AQD, as well as to help address the aquaculture seed shortage in the country. This will surely help in fry production now that SEAFDEC has unlocked continuous milkfish spawning even during colder months with simply using water heaters,” he added.

According to the DA, the milkfish broodstock tanks have a rearing capacity of 2,000 tonnes and can hold 400 milkfish breeders. Production is expected to be at 320 million eggs for one year and is said to be distributed to at least six satellite hatcheries across the region. The multi-species marine fish hatchery targets species of milkfish, pompano, mangrove crab and shrimp with a total rearing capacity of 160 tonnes.

Annually, the hatchery is expected to produce 20 million milkfish fries, 5.5 million pompano fries, 14.4 million shrimp postlarvae and 2.5 million crab instars. The multi-species marine hatchery, on the other hand, is built for freshwater species, Baliao noted. “The multi-species freshwater hatchery, which has a rearing capacity of 40 tonnes will be able to produce the seeds of the tilapia, catfish and the commodity that we are advocating for, the giant freshwater prawn,” he said.