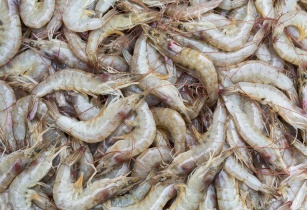 Menon Renewable Products, a specialist in disruptive animal feed technology, has announced results from a study conducted with National Aquaculture Group (Naqua), one of the world’s largest aquaculture operations

The study found that shrimp fed diets containing MrFeed showed enhanced survival of 19%, an increase in growth of 18%, and generated a 40% increase in profitability to the farmer when compared to traditional diets. In addition, the study found that producers can significantly reduce the amount of fishmeal used in shrimp diets, an international goal in aquaculture.

The nursery trial was designed for feed formulas containing 0-15% MrFeed Pro50. A total of 24 nursery ponds were stocked with Specific Pathogen Free (SPF) Litopeneaus vannamei postlarvae shrimp at a density of 437 shrimp per square metre, totalling 20,000 shrimp. Of the 24 ponds, 12 were fed diets containing a range of 5-15% MrFeed Pro50 while the other 12 ponds were fed a control diet without MrFeed Pro50. Shrimp were fed 5% of average body weight for a total of 31-40 days. At harvest, shrimp were collected and measured for survival, average body weight, and feed conversion ratio (FCR), which together allow for the evaluation of overall economic performance.

Diets with MrFeed were formulated at inclusion levels that ranged from 5% to 15%, allowing for significant reduction of fishmeal when compared to the control diet. Compared to the control, shrimp fed the 15% MrFeed diet achieved an 18% greater average body weight and a 19% higher survival rate over the 40-day growth cycle. Furthermore, the average feed conversion ratio (FCR) was 2.0 for the control and 1.4 for the 15% MrFeed diet, representing a 40% improvement for MrFeed.

“MrFeed was developed to replace both antibiotics and fishmeal in aquaculture diets, and this study has demonstrated its achievement of that mission yet again,” said Dr Suresh Menon, founder and president of Menon. “Through each of our studies, including this one at one of the world’s largest shrimp farms, we have proven that our product can replace fishmeal while strengthening the overall economics of shrimp aquaculture. The results of this study were conclusive that MrFeed is not only a viable option for replacement of fishmeal, but a superior animal feed ingredient altogether. MrFeed is a disruptive technology that is already being produced at scale with pricing that is competitive to traditional feed formulations, even before factoring in the economic benefits. There is currently no product on the market that can deliver the performance benefits of MrFeed while delivering on a key sustainability challenge – the elimination of fishmeal from aquaculture diets.”

Located in Saudi Arabia, National Aquaculture Group (Naqua) is one of the largest aquaculture operators in the world following environmentally sensitive production practices. Naqua is committed to environmentally responsible farming practices including reduction in the use of fishmeal in aquaculture feeds. Fishmeal has long been touted as an ideal nutrition source for aquaculture because it offers an ideal balance of amino acids, phospholipids and fatty acids that provide optimal development, growth and reproduction of animals. However, fishmeal supply is limited and while many feed manufacturers have attempted to develop suitable fishmeal replacements, there are few options on the market that are both cost-competitive and provide the necessary nutritional attributes.

Seeing a gap in the industry, Menon identified a unique opportunity to provide an alternative to the market. With a history in biofuels and cellulosic waste processing, Menon has expertise handling organic feedstocks to produce custom-tailored molecules and nutritional components. MrFeed Pro50 was developed as a high protein shrimp ingredient (minimum 50%) containing a blend of amino acids, peptides and nucleotides that have been shown to not only promote growth, but also enhance digestive health in animals.

Noting Naqua’s sustainability mission, Menon began its relationship with Naqua in 2018 with the intent to help them reduce reliance on fishmeal in its shrimp feeds. The teams worked in partnership to organise a nursery trial and design optimal feed formulas. While Naqua does not endorse any third-party vendors, this was done as part of its R&D trials.

MrFeed has been tested on more than 400 million shrimp in trials around the world, averaging a 25% increase in yield as enhanced immune system health drives faster growth and higher survival. The product has been tested extensively in commercial shrimp ponds worldwide in countries including India, Indonesia, Malaysia, and many others.