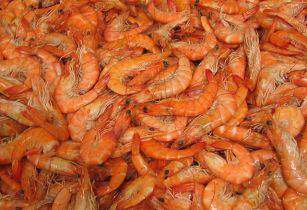 Researchers at Queen Mary University of London’s School of Engineering and Materials Science have extracted a product from shrimp cells, which was applied on zinc-oxide nano rods to make solar cells

Shrimp is no longer just food; the chemicals found in the shells of shrimp and other crustaceans have been used to create electricity-generating solar cells.

The term shrimp is used to refer to some decapod crustaceans, although the exact animals covered can vary. Used broadly, it may cover any of the groups with elongated bodies and a primarily swimming mode of locomotion. Shrimp are also synonymous with prawns, covering stalk-eyed swimming crustaceans with long narrow muscular tails (abdomens), long whiskers (antennae) and slender legs. They are widespread and can be found feeding near the sea floor on most coasts and estuaries, as well as in rivers and lakes. There are thousands of species, and usually there is a species adapted to any particular habitat.

Now, more than just fishing them for a delicious dish, shrimp are being sought for the materials chitin and chitosan found in their shells. These are abundant and significantly cheaper to produce than expensive metals such as ruthenium, which is similar to platinum, that are currently used in making nano-structured solar-cells.

Currently, the efficiency of solar cells made with these biomass-derived materials is low but if it can be improved they could be placed in everything from wearable chargers for tablets, phones and smartwatches, to semi-transparent films over windows.

Researchers, from Queen Mary University of London (QMUL) School of Engineering & Materials Science, used a process known as hydrothermal carbonisation to create the carbon quantum dots (CQDs) from the chemicals found in crustacean shells. Then, they coated standard zinc oxide nano-rods with the CQDs to make the solar cells.

“This could be a great new way to make these versatile, quick and easy-to-produce solar cells from readily available, sustainable materials,” said Joe Briscoe, one of the researchers on the project. “Once we have improved their efficiency they could be used anywhere that solar cells are used now, particularly to charge the kinds of devices people carry with them every day,” he added.

According to QMUL professor of sustainable materials technology Magdalena Titirici, “New techniques mean that we can produce exciting new materials from organic by-products that are already easily available. Sustainable materials can be both high-tech and low-cost. We have also used biomass, in that case algae, to make the kinds of super-capacitors that can be used to store power in consumer electronics, in defibrillators and for energy recovery in vehicles.”