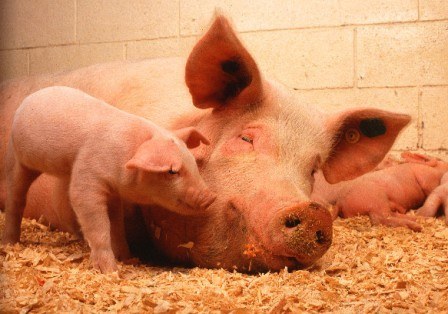 Within the swine industry the largest emissions concern is Ammonia (NH3), which is known for its negative impacts on the environment as well as animal health. Among several strategies, feed supplementation with plant-derived substances has shown substantial benefits in reducing ammonia emissions in pig production systems.

With a growing world population, the global demand for animal protein including pork will continue to grow in the future. As a consequence of increasing demand, animal production will face several challenges. In order to provide safe, high-quality food supply for a growing population, there is an urgent need for increasing agricultural production and for improving production efficiency. Intensification of animal husbandry, however, may cause more gas and odor emissions originating from animal production facilities.
Several gases occurring in swine farms are known for their negative effect not only on animals, but also on the wellbeing of workers. Ammonia (NH3) is one of these harmful gases. It is a colorless gas with pungent odor, derived from the degradation of nitrogenous feed ingredients. Among others, its negative effects on animals include increased susceptibility to respiratory diseases and reduced performance. Furthermore, it may contribute to soil acidification, and odor release, if applied to the soil in excessive levels.
There are many proposed actions and strategies to reduce livestock-related ammonia emissions, such as ventilation, nutrition and manure treatment. Nutritional strategies include diet formulation as close as possible to the animal’s actual requirement based on digestible amino acids. Another option that has recently gained increasing importance is the inclusion of phytogenic feed additives in the swine diet.

Phytogenic feed additives can represent a powerful and applicable solution
By definition, ‘Phytogenics’ are plant-derived materials with the potential to improve feed intake and/or growth performance of animals. Due to their unique structure and composition (mainly natural essential oils), phytogenic feed additives were reported to exert positive effects on animal performance and health. Interestingly, feeding phytogenic feed additives to livestock was also found to decrease ammonia emissions, which contributed to the improved performance of the animal by allowing it to better utilize the amino acids in the diet.
In a recent trial, a matrix-encapsulated phytogenic feed additive based on a blend of essential oils was tested for its effects on growth performance and ammonia and odor emissions of growing-finishing pigs. In this formulation, essential oils (of oregano, thyme, anise and citrus) are encapsulated in a specific matrix, designed to provide enhanced bio availability, stability and improved handling and processing properties. The control group was fed a basal diet and the experimental group was fed the same diet with addition of the phytogenic feed additive in a concentration of 150 or 100 g/ton in the grower and finisher diet, respectively. The two groups were both kept in identical, isolated barns, equipped with sensors for measuring ammonia and other gases in the barn air. Ventilation rates were identical in both barns, as well.
The results revealed that pigs fed the phytogenic feed additive had higher weight gain and 4.3 per cent better feed conversion ratio, confirming the results of previous trials and field reports. In addition, ammonia emissions were on average 24.4 per cent lower in comparison to the control group, indicating the potential of phytogenic substances to contribute to a significant reduction in ammonia emissions. The ammonia concentrations recorded in the barn air.
Furthermore, less CO2 and odors were emitted by pigs fed the phytogenic feed additive. Odor emissions, measured by olfactometry analysis of air sample taken on four days, were reduced by 29.4 per cent.
In the light of these results, it is apparent that one possible solution lies in the feed, where the phytogenic substances were capable of reducing the levels of fermentation products and increasing protein digestibility. Feed supplementation with matrix-encapsulated phytogenic substances is therefore regarded as an option not only to improve growth performance, but also to alleviate emissions from pig production systems.
Aerial ammonia emissions in pig production units can have a negative impact on animals, workers and the environment. There is big potential in reducing ammonia emissions by including plant-derived, i.e. phytogenic substances in pig diets. In this article it was shown how a single feed additive substantially reduced ammonia (-24 per cent) and odor emissions (-29 per cent) in a controlled experiment. Therefore we can conclude there are powerful natural solutions available to agriculture that can substantially contribute to reducing the environmental impact of animal production.