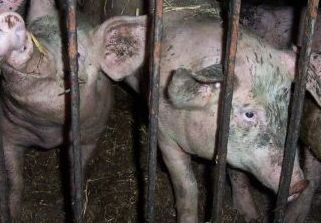 Pigs can be infected by swine flu, human flu and avian flu, making them a perfect mixing pot for different versions of the virus to swap genes

Scientists have evidence that influenza strains common in commercial pig herds can mutate in a way that would allow them to infect humans and spread easily among them.

The study, published in Proceedings of the National Academy of Sciences, found that a flu strain isolated from pigs was able to spread among ferrets and killed them with ease.

Although this particular virus doesn't pose a threat to human health because it is similar to the H1N1 swine flu that has been circulating in people since 2009, the study findings underscore the need for watchfulness, said study researcher Richard Webby, a virologist at St. Jude Children's Research Hospital in US.

Ferrets are commonly used in flu studies because they have human-like responses to flu.

An influenza virus isolated from Korean pigs is deadly and transmissible by air in ferrets, which are used as stand-ins for humans when studying the disease.

Webby and his colleagues collaborated with Korean researchers to assess the public health risk from pigs there. They isolated swine flu viruses from swine abattoirs and infected ferrets with the viruses.

Three of the viruses found in the dead swine caused disease. Only one, however, was highly lethal and transmissible by respiratory droplet, meaning that other ferrets could contract the disease just by contacting airborne fluids coughed or sneezed by an infected ferret.

This virulent strain, H1N2, caused classic flu symptoms in the ferrets, from sneezing and labored breathing to weight loss and high fever. All three ferrets inoculated with the disease died or were euthanized humanely within 10 days.

The strains, which have infected pig herds in for a decade, originated in North America and were probably introduced to through livestock imports.

H1N2 is a close cousin of the H1N1 pandemic virus, Webby said, meaning that people who have been vaccinated or exposed to that pathogen are likely safe from this one.