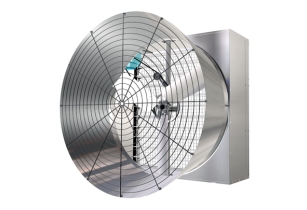 International manufacturers of heating, cooling and ventilation equipment, Termotecnica Pericoli, will celebrate its 50th anniversary with a strong presence at VIV Asia 2017

At the show, Termotecnica Pericoli will introduce its new corporate image, fully redesigned in occasion of its 50th anniversary. The company commented that VIV Asia is the main stage in a series of events that will be part of its celebrations marking this important milestone.

Termotecnica Pericoli representative also said that the fair was a good opportunity to highlight the company’s presence in the Asian market where its daughter company, Pericoli Asia Pacific has been in operations since 2012.

The company will also be launching a new high-performing version of its well-known exhaust fan model, cone fane EOC53. The fan was developed after a detailed combined analysis of market needs and quality requirements. The redesigned aerodynamic impeller – available with three or six blades- and the optimised cone geometry ensure to get the best from the Venturi effect with positive results in terms of performance and energy consumption.

Termotecnica Pericoli was born in 1967 as company that dealt with patenting and manufacturing boilers for hot water production for civil use. This was the beginning of a long and successful history: what used to be just a workshop, soon became an industry exclusively focused on the production of agricultural equipment.