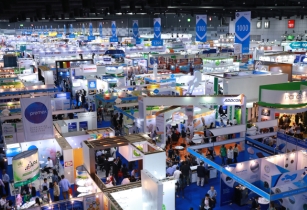 One of the largest livestock shows in the region, VIV Asia 2017 saw participation from more than 45,952 visitors from 130 countries. Business negotiations carried out during the event are expected to exceed US$435mn, thus in process reflecting the overall image of Asia’s animal husbandry economy in rising.

Over the course of three days, VIV Asia 2017 was focused upon providing solutions under the theme From Feed to Food’, from the manufacturing of produce to processing of food products. More than 1,050 companies from 53 countries including China, the USA, the Netherlands, France, Germany and those in ASEAN community including Thailand exhibited in the show.

A vast array of technologies and innovations, including tools and equipment, for the animal husbandry industry were showcased at the venue. Teams of personnel with expertise were stationed nearby, ready to provide answers and pieces of advice up close. The exhibits showcased and the expertise provided at VIV Asia 2017 cover a variety of businesses relevant to dairy cattle, swine, poultry and egg, aquatic animal, as well as pet animal.

International seminars prior to and after the event both proved to be of great interest to businesspersons and animal farming entrepreneurs, as witnessed in the turnover of visitations amounting to more than 18 per cent.

In addition, VIV Asia 2017 was equipped with myriads of activities: the announcement of winner of 'e-Novation Awards,' the results of which were derived from the number of votes cast by participatory visitors. In addition to e-Novation Awards, the winners of 'Asian Personality Awards' were also announced during the official opening event. Asian Personality Awards, which has found its inception in the wake of collaboration between VIV Asia and Positive Actions Publication, was presented to individuals who have devoted themselves to the animal husbandry industry in Asia.

Furthermore, this year’s edition saw the launch of a brand-new online platform titled ‘VIV Online,’ in response to the global technology landscape and virtual world. The event also organsied a special online campaign, the Teddy Bear campaign, which allowed personnel in the animal husbandry industry to participate by submitting short audiovisual clips with VIV Asia’s mascot. These campaigns were created to showcase and support the buildup of the platform and centre of experts in animal husbandry discipline as witnessed in VIV Asia.

Some of the major exhibitors at the event included Nutriad, Elanco, Biomin, Alltech, Impextraco, Wenger and Big Dutchman, which had showcases of their latest equipment and products.

Yousef Daoud, product manager of breeders at Roxell, who participated in the event, said, “We have always participated in VIV Asia. We believe VIV Asia is an excellent exhibition to meet customers. VIV Asia is the spot to meet many different equipment suppliers from across the world.”