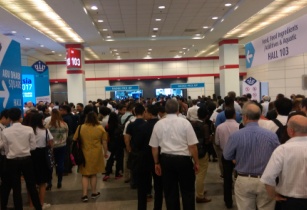 International livestock tradeshow, VIV Asia has launched the 13th edition of the show to packed halls at BITEC, Bangkok

Organised by VNU exhibitions on the theme ‘From Feed to Food’, the 2017 edition of the show is held at Bangkok from 15-17 March 2017. With more than 1,057 exhibitors from 55 countries including China, the USA, the Netherlands, France, Thailand, the event has already broken records in terms of exhibitor numbers.

The event was officially launched today, with an opening ceremony marking the event. The ceremony was presided over by the Deputy Permanent Secretary of the Ministry of Agriculture and Cooperatives Thanit Anekwit and attended by the president of Thailand Convention and Exhibition Bureau, Nopparat Maythaveekulchai, ambassadors and diplomats from several nations as well as event sponsors and supporters from government and private sectors.

On the first day, six halls that covers more than 40,000 sq m of space, was completely packed and the exhibitor stalls buzzing with activity.  VIV Asia’s comprehensive knowledge programme also got off to a good start on the first day with a wide range of seminars and conferences held on health and pet nutrition, dairy product business, swine productivity and aquaculture.

At the opening ceremony Thanit Anekwit said, “The Ministry of Agriculture and Cooperatives has a vision to integrate the development of traditional methods of agriculture, which is focused on administration and management and the distribution of wealth and income to all regions in Thailand, with an aim to enable the country to step into ‘Thailand 4.0’ in accordance with the policy of the ministry. The year 2017 is designated to mark the occasion upon which Thailand’s agricultural standards will be elevated and remain in continuous sustainable development.” He added that a number of companies were selected to provide showcases of their technology and innovation at VIV Asia with the aim to help Thailand become a hub of animal industry product exportation to the global market.

Nopparat Maythaveekulchai said, “VIV Asia is well celebrated as the trade exhibition and an event of seinars on agriculture and animal husbandry, whether it be in terms of superior quality of trade exhibitors, modern technology, presentation of innovations, new research and developments, not to mention a variety of special booths and international pavilions, as well as high level of professionalism of the organizers and alliance.”