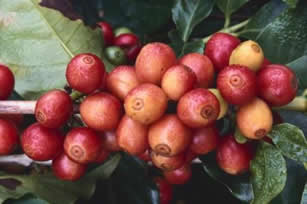 Copper fungicides first used against coffee leaf rust (Hemileia vastatrix) on the Indian sub-continent during the 19th century remain the mainstay for control of this most important disease of coffee, now present in all main coffee growing regions of the world.

Coffee Leaf Rust
First indications of coffee leaf rust are yellow-orange coloured round spots (lesions), which are clusters of sori visible on the lower (abaxial) leaf surface. When viewed from the upper (adaxial) surface they look like ‘pin-spots’ or ‘oil-spots’ and with age whiten from the centre outwards and eventually become necrotic. A single coffee leaf suffers multiple infections and lesions that rapidly join together making the whole leaf necrotic and causing premature leaf fall.
Serious whole canopy infection means the leaves are unable to supply the carbohydrate and other nutrient requirements of developing coffee berries. As powerful ‘sinks’, the berries will simply draw their requirements from carbohydrate reserves in the roots and shoots thus seriously debilitating the whole coffee bush. Advanced and serious infection by the coffee leaf rust pathogen is characterised by heavy and repeated defoliation causing die-back and a general overall weakening of the whole plant with large reductions in yield of coffee berries.
Uredospore germ tubes of Hemileia vastatrix can only gain entry through stomata which in coffee are confined to the lower or abaxial (under-surface) of the leaf. The abaxial surface therefore presents an ‘open door’ through which the leaf rust pathogen can enter. The abaxial surface stays wetter for longer and only experiences diffuse light which favours spore germination. Then the abaxial surface is more difficult to cover with fungicide using standard high volume hydraulic spraying equipment. The upper (adaxial) leaf surface is covered with a thick and unbroken waxy cuticle including a wax bloom.
Coffee leaf rust uredospores are inhibited by high light intensities which will almost certainly dry out the leaves (both upper and lower surfaces) more quickly, reducing both free water and humidity and further creating an overall micro-environment not conducive to successful spore germination.
Leaves inside the canopy more likely to be shaded, and therefore more predisposed to surface wetness and high humidity with wide open stomata, are more vulnerable to infection. Even partial opening in response to the formation of dew on the leaf surface is potentially dangerous because this high level of surface wetness will clearly favour germination.
Compared with leaves in direct sunlight, those in the shade have thinner cuticles and cell walls. At the same time there is a smaller volume of mesophyll tissue with larger intercellular spaces between the parenchyma cells, all of which will make it easier for leaf rust infections to develop inside the leaf once the pathogen has secured entry through the stomata.

The fungicide deposit
The lower leaf surface of fully expanded mature leaves inside the canopy is the most at risk of infection by coffee leaf rust. Light intensity is lowest and conditions favouring spore germination (free water and high humidity) are most likely to occur and persist over a longer period of time. It follows that initial deposits of fungicide should be distributed accordingly and possess sufficiently high tenacity to resist weathering by high intensity rainfall which invariably occurs for at least part of the year wherever coffee is grown.
Deposits of fixed copper fungicide like cuprous oxide show a high level of natural inherent tenacity. This increases as mean particle size of the formulated product is reduced with a correspondingly narrower particle size distribution. For instance, all particles in cuprous oxide manufactured by Nordox AS (Oslo, Norway) are within the 1µm to 5µm diameter range with 80 per cent less than 2µm and 99% less than 5µm, the benefit of which was shown during rainfall simulation trials carried out by Centrilab in Netherlands. After receiving rainfall at 10mm/hour intensity, the retention of Nordox cuprous oxide (mean particle size 1.2µm) was 80 per cent of the initial deposit, compared with less than 40 per cent for cupric hydroxide and copper oxychloride with mean particle sizes of around 3µm.
Fungicide deposits distributed across the upper surfaces of coffee leaves are not wasted, especially when fixed copper fungicides are used for the control of leaf rust. The sparingly soluble property of fixed copper fungicides like cuprous oxide facilitates gradual release and redistribution of Cu2+ (the active fungicide principle) under the influence of weathering, mainly natural rainfall but also condensation in the form of dew and from sprinkler irrigation.
Fungicide can be redistributed across the same leaf surface or onto new leaves below, which have appeared since the last spray application and therefore lack initial deposit and fungicide protection. However, the most important component of fungicide re-distribution in coffee for leaf rust control is transfer of Cu2+ from the upper leaf surface onto the lower leaf surface of the same leaf. Soluble Cu2+ is carried in films of surface water which move to the margin and then ‘creep’ under and onto the underside of the leaf where the stomata are situated.
The significance of this phenomenon is that uredospores are transferred in exactly the same way onto the lower leaf surface where entry points (stomata) are available. And conditions for spore germination are most favourable especially along the leaf margin where water carrying both spores and soluble copper fungicide (Cu2+) accumulates.

Cuprous oxide
Copper fungicide as Bordeaux and Burgundy Mixtures was established to fight against coffee leaf rust by the last decade of the 19th century. But it took another 40 years for the recommendations to be made. The slow start was due in part to world economic depression with coffee prices at an all-time low, as well as a lack of suitable spraying equipment.
Recommendations were in place for India by the 1930’s but coffee spraying on a world-wide scale did not start in earnest until after the Second World War, by which time the use of long hoses from a static pump had been superseded by dedicated spray application equipment.
Following three decades was the pinnacle for spray application research for coffee.  Cuprous oxide quickly came into its own because virtually all research used Perenox a wettable powder formulation of cuprous oxide marketed by ICI (Imperial Chemical Industries) but actually manufactured by Nordox AS in Oslo, Norway. Since then many new organic fungicides have been evaluated and some used, but none could match inorganic cuprous oxide’s combined efficacy and economy.
Peronox 50WP has disappeared from the commercial scene along with ICI Agrochemicals but cuprous oxide lives on as Nordox 50WP, Nordox Super75WP and Nordox 75WG, now marketed by the original manufacturer Nordox AS of Norway. One extra important advantage of using copper fungicides like cuprous oxide on coffee, established some 50 years ago but now often overlooked, is the so called ‘tonic effect’ for coffee trees provided by copper in its role as an essential micronutrient. Copper fungicide sprays achieve this tonic effect by extending leaf retention and therefore boosting tree growth and yield.

Spray application
Despite the important role of fungicide redistribution in coffee leaf rust control, those spray application techniques which deliver droplets into the heart of the coffee tree canopy, while at the same time achieving good lower leaf surface coverage, clearly offer distinct advantages. For this reason, coffee leaf rust research and control during the 1950s to 1970s concentrated on the use of shoulder-mounted (knapsack) low volume mistblowers.
The air blast generated by this two-stroke petrol driven machine first shears the spray liquid into droplets and then carries them into and onto the coffee tree canopy.  They proved highly appropriate for coffee rust control for the following reasons.
The leading edge of the air stream opens up the canopy by pushing aside the shroud of still static air that typically surrounds a tree.  The turbulence thus created flips those leaves in the outer canopy shell upward creating gaps for the main body of the droplet laden air stream to enter.  Not only does this allow movement of droplets deep into the canopy but also achieves excellent under-leaf coverage along the way, because those leaves flipped upwards have their lower surface exposed to incoming spray droplets. This effect was established for other tree crops like citrus, the proof being in higher deposition of copper on the lower (abaxial) surface compared with the upper (adaxial) leaf surface.
Research on coffee in Papua New Guinea using air shear nozzles on shoulder-mounted mistblowers for low volume applications of cuprous oxide showed similar results.  Application of 2.8 kg/ha of cuprous oxide in a spray volume of 560l/ha gave comparable deposits on both lower (abaxial) and upper (adaxial) leaf surfaces – 28.2 and 32.8 µg Cu2+/cm2, respectively.  Copper deposits on the lower leaf surfaces were clearly high and in the right place for effective long duration control of coffee leaf rust. Copper deposits on the undersides of leaves whether coffee, citrus or equivalent evergreen tropical tree crops are better protected from high intensity weathering effects of tropical rainfall over a long period of time.