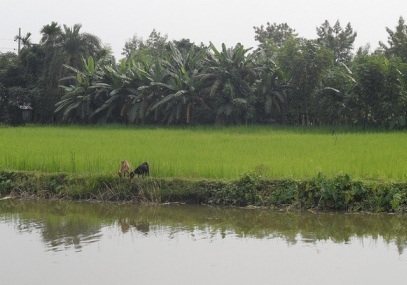 With a focus on helping rice farmers reach Myanmar’s production potential, the European Union has pledged a large amount of money and the World Bank recently ended its 25-year hold on grants to Myanmar

According to the International Rice Research Institute (IRRI), millions of dollars are being pledged to aid in the country’s recovery and it is poised to become a major force in the global rice trade, if the full potential of its vast and rich rice-producing areas, cradled by the Ayeyarwady delta, can be realised.

That is what a collaboration among Myanmar, IRRI and the Livelihoods and Food Security Trust Fund (LIFT) seeks to realise in an undertaking that addresses the risks farmers face in these rice-growing areas.

“Interventions to reduce the vulnerability of Myanmar’s farmers to extreme weather being caused by climate change mean promoting the use of rice varieties that can tolerate floods, salinity, and drought, as well as management approaches that support optimum performance of these improved rice varieties,” said IRRI’s Dr David Johnson, coordinator for the Consortium for Unfavorable Rice Environments (CURE).

August this year saw severe monsoon flooding in Myanmar’s Ayeyarwady delta rice-producing areas. Consequently, rice farmers were left with flooded rice farms and damaged crops. In other areas in the delta, rice is affected by salinity from sea-water intrusion, resulting in land being underused.

If the two million-hectare rice-producing areas in the delta use better management practices and appropriate rice varieties, they could easily boost Myanmar's domestic and export capacities – critical for a country whose per capita rice consumption is the highest in the world at 190 kg per year.

IRRI has been working in Myanmar since the 1970s and is now helping to pull together national and international partners to provide support to rice farmers to minimise losses when flooding occurs.

By using data from satellites and remote-sensing technology, IRRI and its partners will determine those specific areas in Myanmar that are prone to floods, salty soils, and drought. Through high-resolution imagery, these areas will be better identified and targeted for intervention.

“IRRI's breeding programme has been working with government scientists to develop improved varieties that tolerate these constraints and link farmers to these innovations,” said Dr Johnson.

“On top of these stress-tolerant varieties, IRRI also develops management technologies that not only help deliver higher yields but also promote environmental sustainability and reduce costs,” he added.