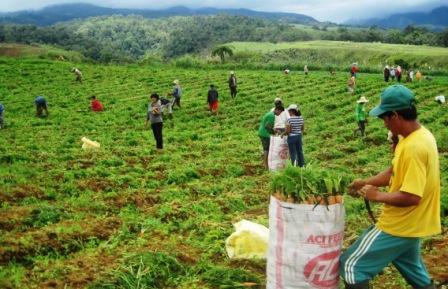 The Northern Mindanao Vegetable Producers Association (NorMinVeggies) is implementing a groundbreaking farming and marketing system that has boosted the stock of hundreds of small-hold farmers across Mindanao in the southern Philippines, and revolutionized vegetable production in the region.

Starting with only 15 producer-members in 1999, NorMinVeggies’ core membership has expanded to 178, which include farmers, cooperatives, foundations, and growers' associations.
The transformation began when NorminVeggies introduced the cluster farming method to its members. Under the clustering system, a group of farmers in selected areas are tasked to grow a particular crop utilizing a set of farming protocols and following a fixed production schedule.
The association could then schedule the volume of the crops it would produce at a time based on the specific requirements of buyers.
Commodity clustering is not new to Mindanao, where it has long been practiced through contract-growing agreements between farmers and large multinational agribusiness firms.

Unique approach
What makes NorminVeggies’ approach different is that it builds on a partnership between relatively small-scale “independent” growers with other sources of income and some access to capital and technology—its core members—and what it refers to as “small” growers with tiny family-operated farms, of which Mindanao has thousands.
Working with more than 3,000 affiliate growers in two provinces, NorminVeggies now produces at least 12 different kinds of semi-temperate vegetables, which include iceberg and romaine lettuce, broccoli, cherry tomato, cauliflower, carrots and sweet corn.
Through its “private-private” partnerships with these affiliate growers, it supplies bulk-buying clients in other regions in the Philippines with at least 70 metric tons of vegetables weekly, in addition to supplying more traditional markets in Mindanao.

Clustering advantages
In the first quarter of 2011, the association shipped out 1,273,255 kilograms (or 1,403 MT) of assorted vegetables to various buyers across the country.
In An Agenda for High and Inclusive Growth In the Philippines (2010), the Asian Development Bank (ADB) cited NorMinVeggies as a “model for facilitating the grouping of small producers to achieve the advantages that clustering offers.”
The association’s experience was also highlighted in the World Bank’s World Development Report 2008: Agriculture for Development and at the ADB global food security forum in 2010.
When a handful of enterprising vegetable growers in Bukidnon Province formed NorminVeggies 12 years ago, its members knew they were up against established farming competitors with access to more resources and advanced production technologies.
But the fledgling organization was determined to address a major concern limiting the competitiveness of small farmers in the region: how to efficiently ship out their produce to markets, while maintaining quality and reducing post-harvest loses.
“Our goal was to engage marginal farmers who had very limited financial resources,” relates Marcelino Remotigue, NorminVeggies president.
Most smallhold farms operating individually had no guarantee their produce would fetch good prices, or at the very least break even.
Local buyers explained they had to trim as much as 25 per cent from the total weight of vegetable deliveries, to remove portions that were damaged during transport.
And due to the lack of proper production and post-harvest techniques, such farmers found it difficult to produce vegetables that could meet the strict quality requirements of prospective institutional buyers.

Innovative farming
Remotigue recalls that small growers initially found it difficult to adjust to the system’s stringent protocols. But after a few months of trial and error, they began to realize the benefits of the innovative farming method.
They were not only producing better quality vegetables; production volumes also shot up.  “I constantly reminded my members that if they wanted to be part of a cluster, they really had to strictly follow the system’s protocols,” he said.
By combining their harvests, the growers are able to take advantage of economies of scale and negotiate for better prices with buyers. The group regularly fills large volume orders which are shipped directly to buyers across the country.
“This way, the group is able to come up with a consistent quality and volume which is crucial to our buyers,” Remotigue said.
NorminVeggies developed its value chain with the help of the U.S. Agency for International Development, through its Growth with Equity in Mindanao (GEM) Program.
USAID-GEM also provided NorMinVeggies with training in Good Agricultural Practices (GAP), improved post-harvest handling techniques, marketing and logistics assistance as the association developed and started to expand its operations.
This assistance enabled the association to “break through” as a supplier to institutional buyers and markets, says Joan Cua Uy, NorMinVeggies vice president for marketing.
The association now plays a vital role as a major service provider to the local vegetable sector by providing training to farmers, initiating market promotion activities, and organizing vegetable industry events.

In 2006, the association, again with support from USAID-GEM, established the NorMinVeggies Consolidation Center, which serves as a centralized trading and consolidation area for the association’s produce.
Over time, the center has evolved to become a supply chain manager that coordinates, for a fee, the interaction among the small farmers, buyers, and service providers, such as seed and logistics companies.
“We see ourselves as growers who are also able to provide business development services for which other growers are prepared to pay,” Uy says.
NorMinVeggies’ clients now include a major supermarket chain and a high-end hotel, consolidators for fastfood chains like KFC, and hotel and restaurant distributors.