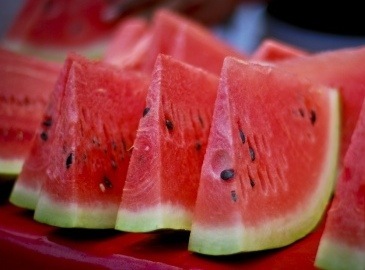 A consortium of more than 60 scientists from the United States, China, and Europe has published the genome sequence of watermelon which could lead to a more nutritious, tastier and disease-resistant fruit

In the watermelon genome sequence, published in the journal Nature Genetics, researchers discovered that a large portion of disease resistance genes were lost in the domestication of watermelon. With the high-quality watermelon sequence now complete, it is hoped that breeders can now use the information to recover some of these natural disease defenses.

The authors reported that the genome of the domesticated watermelon contained 23,440 genes, roughly the same number of genes as in humans. The group compared the genomes of 20 different watermelons and developed a first-generation genetic variation map for watermelon.

Researchers are examining the cucumber and watermelon genomes to expand their understanding of the plant vascular system. They think that these genomes will help them learn more about the role of proteins and RNA species that move through the vascular system.

This information allowed them to identify genomic regions that have been under human selection, including those associated with fruit color, taste and size.

“Watermelons are an important cash crop and among the top five most consumed fresh fruits; however, cultivated watermelons have a very narrow genetic base, which presents a major bottleneck to its breeding. Decoding the complete genome of the watermelon and resequencing watermelons from different subspecies provided a wealth of information and toolkits to facilitate research and breeding,” said Zhangjun Fei, a scientist at the Boyce Thompson Institute for Plant Research at Cornell University, and one of the leaders of this project.

Believed to have originated in Africa, watermelons were cultivated by Egyptians more than 4,000 years ago, where the fruit was a source of water in dry, desert conditions. They are now consumed throughout the world - with over 400 varieties in global commercial production. China leads in global production of the fruit, and the United States ranks fourth with more than 40 states involved in the industry.