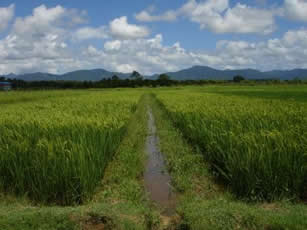 Effective control of stored-grain pests and diseases with minimal pesticide use requires an integrated approach combining sanitation, monitoring, and other preventive practices.

Cereal panicles (the grain bearing heads) are infected and damaged by field fungal pathogens during crop growth and development, and harvested grain is constantly at risk of infection from post-harvest pathogens during the entire grain processing and storage period. Loss in grain yield from fungal infection and associated physical deterioration is high but the ability of some fungi to synthesise chemicals called mycotoxins and left as ‘calling card’ contaminants in grain is a much more sinister and deadly dimension. Mycotoxins are fungal metabolites, the ‘signature’ chemicals for specific plant pathogens. They are toxic to livestock and humans at trace concentrations, measured in parts per million (ppm) and parts per billion (ppb), and cause a wide range of diseases generically known as ‘mycotoxicosis’. Mycotoxins are supremely stable even withstanding digestion and passing along the food chain to appear in damaging concentrations in milk and other farm animal products.

Fungi like Fusarium species are versatile pathogens which infect the panicles and are subsequently carried into store on harvested grain along with their mycotoxins. Some continue to grow and produce mycotoxins on stored grain alongside the classic post-harvest, storage moulds like Aspergillus and Penicillium each with their own signature mycotoxins. Store hygiene including the programmed disinfection and disinfestation of all transporting, loading and storage equipment is essential to prevent any infection carry-over from one grain store load and into the next.

Grain cleaning begins with threshing during combine harvesting and is completed post-harvest by grain cleaning using aspiration equipment and vibrating screens or by gravity separation.  Physically intact and healthy cereal grains are separated and isolated from chaff, straw, weed seeds and damaged or diseased cereal grains. Physical contamination will invariably reduce the market value of grain, but the really serious damage is caused by the transfer of mycotoxin producing fungi from the field and into the grain store.

Ergot disease is caused by Claviceps purpurea with a signature mycotoxin that has hallucinatory effects. Ergotism is one of the oldest known mycotoxicoses. One of the currently most widespread and damaging mycotoxin-producing fungal pathogens is Fusarium graminearum responsible for ‘head blight’ or ‘scab’ disease in wheat, barley, oats and rice or ear-rot disease in maize. In addition to reducing grain yield and quality the pathogen produces high levels of mycotoxins, namely the trichothecenes e.g. T-2 and HT-2 toxins [Type A] and deoxynivalenol [Type B] and the oestrogenic mycotoxin zearalenone.

Damage to grain in store happens is due to interacting biotic and abiotic factors. The biotic factors are fungal pathogens (and bacteria, mites and insect pests) and the grain itself which are all affected by various abiotic factors that control metabolic activity and growth. Temperature and moisture are the two key abiotic factors governing grain integrity and longevity. Maintaining these at optimum levels inside and outside of the grain is the secret to successful and cost effective storage.

*Equilibrium moisture level of grain expressed as g/kg; divide by 10 to express as per cent moisture on a weight to weight basis; for example 135 g/kg is equivalent to 13.5% w/w (weight/weight)

Grain moisture contents in equilibrium with 70 per cent RH are shown in Table 1 (in bold). These are the levels (at 25°C) beyond which most stored grain begins to show microbial spoilage and damage (Henry and Kettlewell, 1996). In practical terms this means that grain intended for storage at 25°C must be dried to the moisture level indicated in bold type and maintained at this level. Acceptable equilibrium grain moisture and relative humidity levels are reassessed accordingly with higher and lower grain storage temperatures.

Cereal crops can be harvested by combine and be successfully threshed at quite high grain moisture levels (over 50% w/w) but harvesting at this level is not advised. Yield will be lost because maximum grain dry weight has not been attained and moreover farmers will not want the expenditure of artificial drying of grain down to moisture levels of around 13-14% w/w. One exception to this rule is if grain is treated with an appropriate acid as a mould inhibitor but this will essentially restrict the grain to use as animal feed. Other problems associated with harvesting too early, when the grain is wet, relate to milling. For instance, immature kernels in early, high-moisture rice harvests do not mill well, while maize harvested at high moisture content is soft and easily punctured or split.

Most farmers are forced to carry out at least some artificial drying of grain to reduce the moisture content in the crop and control relative humidity levels, and therefore grain spoilage, is essentially zero. The two main types of commercial drying utilise air that is at near-ambient temperature or air which has been heated. Near-ambient air drying methods restrict the rate of mould growth so that drying is completed before any substantial mould growth takes place. Heated-air drying methods essentially avoid the mould problem altogether because the high temperatures used to rapidly dry the grain also kill the pathogens.

Mycotoxins can mean ‘life or death’ for cereal grain as a marketable and consumable commodity. Mycotoxins are difficult to remove or neutralise, so prevention is always better than cure. A dull appearance and musty smell of grain invariably means mould growth, but not necessarily the presence of mycotoxins because not all fungal pathogens and storage moulds are mycotoxin producers. Even so, presence or absence of mycotoxins is insufficient for national and international grain trading which demands to know the specific mycotoxin(s) present and their exact concentrations. Concentrations of mycotoxins that make grain unfit and dangerous for human and livestock consumption are measured in ppm and ppb and therefore require measurement down to same exacting trace levels. Mycotoxin testing is essential to determine if there is a problem requiring action or whether a particular treatment has worked. It must be highly sensitive and provide reliable and reproducible results whether carried out onsite or in the laboratory. Mycotoxins are not randomly or uniformly distributed throughout grain bulks and loads but tend to occur in ‘hot spots’ corresponding to the growth of fungal colonies. For this reason sampling from a moving stream of commodity reduces the selection biases associated with sampling a static load.

Laboratory testing equipment is highly specific for mycotoxin type and ultra-sensitive, detecting mycotoxins in parts per billion at least. Results are delivered with speed, accuracy and repeatability.  These attributes are now available in practical ‘hands-on’ kits that can be used onsite by farmers and grain store managers to get fast and accurate results-- all with an absolute minimum of training.