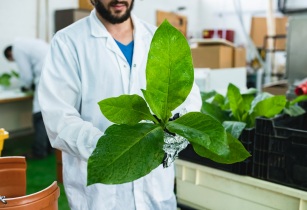 Isreali foodtech start-up, BioBetter has announced a new role for the Nicotiana tabacum plant upon discovering it can overcome the hurdle of scaled production in cultured meat

Working behind the scenes of the emerging cultured meat industry, the company is repurposing tobacco plants to create the growth factors necessary for the cellular development of cultivated meat. BioBetter claims this landmark botanical breakthrough could significantly reduce the cost of cultivated meat and advance it rapidly to scale up.

According to BioBetter, cultivated meat start-ups often face challenges and hurdles in developing a scalable and cost-effective production platform to make cultured meat affordable for the mass market.

Cell-derived meat requires a culture medium composed of a mix of amino acids, nutrients, and most importantly, growth factors (GFs) without which cells cannot multiply. Currently, such media are said to be expensive due to the complexity of production. For example, insulin and transferrin GFs are collected from livestock, making it difficult to obtain large quantities. Some can be attained via fermentation of yeast or bacteria, but those methods require expensive facilities. The purification process also is complicated and expensive.

“The Good Food Institutes determined that approximately a 100-fold reduction in insulin and transferrin costs is required to make cultivated meat economically viable,” explains Dana Yarden, MD and co-founder of BioBetter. “It is estimated that growth factors and cell-culture media can constitute 55-95% of the marginal cost in manufacturing cell-based foods.”

BioBetter harnessed the inherent advantages of tobacco plants by turning them into bioreactors for expression and the large-scale production of proteins. Plant bioreactors use renewable energy, fixate carbon dioxide while being self-forming, self-sustaining, and biodegradable. BioBetter uses open-field plantations to enable a fast, efficient, and flexible response to market needs.

“There are multiple advantages to using Nicotiana tabacum as a hardy vector for producing GFs of non-animal origin,” said Amit Yaari, PhD, CEO of BioBetter. “It is an abundant crop that has no place in the food-and-feed chain due to its extremely bitter taste and content of undesirable alkaloids. The global trend for reducing tobacco smoking also is raising concerns among tobacco growers that the crop might eventually become obsolete. Yet the tobacco plant has huge potential to become a key component in the future of food.”

The company says tobacco plants can achieve up to four growth cycles annually and be harvested all year. This translates to more voluminous outputs per square meter of growing space.

BioBetter’s uniqueness lies in refining and highlighting the advantages of the tobacco plant platform for production on a huge scale. The start-up applies a proprietary protein extraction and purification technology that enables it to exploit nearly the entirety of the plant, and deliver a high purity product at broad-scale production.

The company currently sources tobacco plants from local growers but the goal is to eventually source the raw material from tobacco growers globally. Based on cultivation in open fields and BioBetter’s proprietary purification technology, the cost of growth factors production is dramatically reduced, finally bringing cost efficiency to cultured meat production.