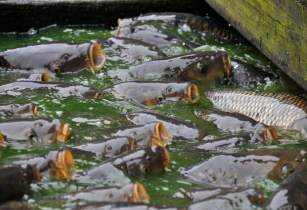 Prahok is a fish paste made usually from the trey riel fish, and consumed widely by Cambodians locally and worldover. Originally, prahok was used to preserve fishes in leaner months in areas where refrigeration is uncommon. Now, there are a wide number of consumers in different sectors that use prahok in their dishes.

According to the standard, specific and accepted characteristics of prahok will be established, including colour and odour. In addition, the limits of chemical additives and pathogen counts in production will also be assessed and analysed.

Usually between December and March, trey riel make their way into Cambodian water bodies, and prahok is widely prepared during this time. Given the growing consumption of the product, fisheries administration official in the Cambodian Agriculture Ministry Kao Sochivi said that ensuring quality of the product was essential now more than ever.

The reason behind falling standards of prahok has been attributed to an outdated production cycle that entails murky water, rotting fish mash and crude processing techniques. Added to that, prahok usually has a strong, pungent smell making it harder to differentiate between a good and bad batch.

According to Sochivi, an average Cambodian family consumes 10 kg of prahok annually. In addition, several kilogrammes of the product are shipped within ASEAN and outside for the Cambodian diaspora.

In compliance with the Asean Economic Community (AEC), the new national quality standard will ensure high quality produce, removal of shortcuts, mitigate tariffs and level the field for all producers.

“After joining the AEC, there will no longer be tariffs, so product standards become the main requirement for exporting,” explained Chan Borin, director-general of the Institute of Standards of Cambodia.

Prior to 2014, there were less than a 100 industrial standards for all products in Cambodia. Today there are 770, of which 218 are mandatory for AEC cross-border trade, he said. By following a standard, prahok producers can compete on quality rather than price alone.