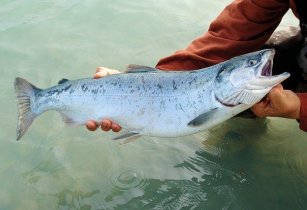 The Cora hypermarket chain, which has 61 stores in France, has introduced salmon fed by on a diet that includes natural marine algal oil by Veramaris, partially replacing wild fish in the salmon feed

Samuel Denoux and Jonathan Rotgé, Cora’s Seafood director and buying manager, said, “Our team is proud to have mobilised an entire value chain to make this quality of salmon accessible to everyone.”

Karim Kurmaly, Veramaris CEO, said “The launch is testament to the progressive culture amongst French retailers who realise the benefits of selling salmon raised on this diet. Not only can it help increase the amount of EPA & DHA Omega-3 in the French diet, but our algal oil is also sustainable as it can replace fish oil coming from wild-catch forage fish.”

The French diet is inadequate in EPA & DHA Omega-3. As a nation, it consumes not enough seafood, especially oily fish, but these natural nutrients are essential for health.

“EPA & DHA Omega-3 perform an important role in supporting heart, eye and brain health, and in regulating and resolving inflammation within the body, preventing the level of inflammation becoming too high. You could say they strengthen the body’s natural defences,” commented Doctor Patrick Sérog.