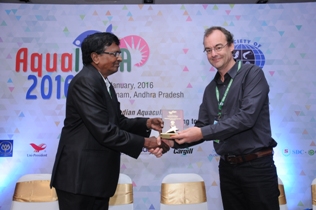 The conference Aqua India 2016 was held this year for two days in January, focusing on the theme “Indian Aquaculture: Assuming Responsibilities & Adapting to Changes”

Nutriad showed its commitment to the Indian aquaculture industry through a gold sponsorship for the Aqua India 2016 event held this January.

SAP president S. Muthukaruppan added, “67 per cent of the export value is shrimp of which 77 per cent is farmed. Increased production costs and diseases are likely to slow Indian shrimp production in 2016. A more than 10 per cent production decline due to flooding and disease outbreaks was already seen in 2015. A recovery is likely to be marginal due to lower returns from farming.”