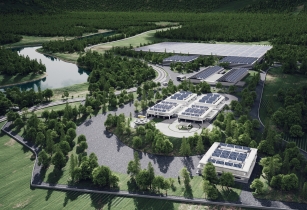 A US$162mn investment is being made to create “Soul of Japan,” a state-of-the-art RAS salmon farm that will be the largest ever built in Asia, and one of the largest globally. The 137,000 sq m farm will produce up to 10,000 mt of Atlantic salmon per annum and will be fully operational from 2021.

Pure Salmon’s first Atlantic salmon RAS facility is already fully operational in Poland and producing adult-size fish of five to six kilograms. It is 50 per cent owned by 8F’s private equity fund and 50 per cent by AquaMaof.

In addition to acting as a proof-of-concept, the facility is also a research and development and training location for Pure Salmon staff globally.

Pure Salmon has been developed by 8F Asset Management Pte. Ltd., a global asset management firm focused on impact investing. Pure Salmon will use RAS technology in its land-based farms, a proven and scalable method of aquaculture.

With further planned rollouts of large-scale facilities of 10,000 tonnes or 20,000 tonnes production per annum in the US, Europe, China and around the world, Pure Salmon’s launch is seen to generating hundreds of local jobs and helping solve the global fish shortage in the Asia-Pacific region.

Commenting on the launch, Stephane Farouze, chairman and founder of 8F, noted, “RAS technology will be the leading driving force for growing salmon in a resource-strained world, where producing sustainable food without further damaging our oceans is paramount.”