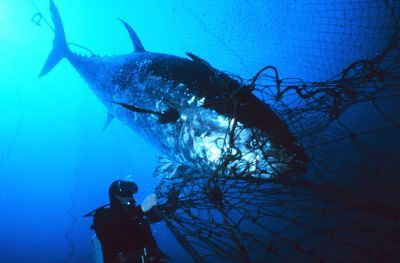 During the gathering of stakeholders held last year in Manado, Indonesia, Marferino Tan, president of the SOCCKSARGEN (South Cotabato, Cotabato, Sultan Kudarat, Sarangani and General Santos City) Federation of Fishing and Allied Industry (SFFAI) admits the industry is now “in the vicinity of US$294mn and could continue to plunge because of certain factors such as climate change that affects both the quantity and quality of the catch.”

Because of tuna’s rapid decrease not just on local waters but also on the international seas, the Western and Central Pacific Fisheries Commission (WCFPC) – to which the Philippines is a member – have imposed a ban on tuna fishing which further aggravated the situation. The ban was justifiable, according to the Commission, as a forecast of at least 10 per cent in global tuna catch has been estimated in the next three years and the prohibition may reduce by a minimum of 30 per cent from the 2001-2004 average catch. Tan said the daily fish in the year 2000, when the industry was at its peak, was placed at 300 to 500 tonnes but has been significantly reduced by 30per cent in recent years. The decline of tuna catch also meant the displacement of more than 40,000 fishermen out of the 150,000 who are directly and indirectly involved in the tuna industry, he said. The value of tuna exports on the other hand dropped to 8.14 per cent in 2010 from the 2009 data at US$359.38mn.

Stricter health rules by the European Union, which accounts for half of the Philippine tuna exports, would inflict a gaping wound to the industry. Agriculture Secretary Proceso Alcala urgently called tuna fishing companies to go into research and development to produce better fish and prawn strains that are resistant to diseases and would not succumb to infections.

‘Environmentally harmful’ means of tuna fishing such as fish aggregating device (FAD) may also result to losing the country’s lucrative markets of Canada and the United Kingdom. According to global environment group Greenpeace, many global markets for tuna are now demanding fish caught using sustainable methods as these countries are cognizant of the recent critical phase of tuna in the oceans. The group said certain areas in the Pacific have been closed to FAD for the past three years as a result of the conservation measures taken by the WCFPC in response to the decline in the bigeye and yellowfin tuna stocks. Unfortunately, the Philippines – the second largest canned tuna producer in the Western and Central Pacific Ocean next to Thailand and the third largest tuna supplier in the world –lobbying to reverse these conservation measures.