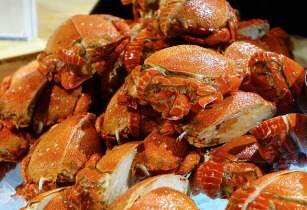 Crab exports from Vietnam have grown in the first seven months of 2015, and shrimp exports to the US are projected to rise in the rest of the year

Till July, Vietnamese crab exporters earned a total revenue of over US$60.7mn in 2015, up almost six per cent YoY. The country exported crab to 34 markets in the first half of the year, adding six markets comparing to the same period in 2014. Exports to all the markets, except EU and Canada, rose.

The biggest export market, with 47 per cent of the total value, was the USA. Vietnam exported US$30mn worth of crab to the US in the first seven months of 2015, up 1.7 per cent over the same period last year.

For the same period, Japan rose to be the second biggest crab market for Vietnam. Crab exports to Japan rose by 28.7 per cent, for a value of about US$10.7mn.

The third biggest export market for Vietnamese crab is now EU. Till July 2015, crab exports to EU brought nearly US$10.5mn to Vietnamese exporters, which was down 12 per cent YoY.

For Vietnam, this translates into an opportunity for increasing shrimp exports to the US, which accounts for nearly 20 per cent of Vietnam’s shrimp export market. In 2014, Vietnam had exported shrimp worth more than US$1bn to the US, but in the first eight months of 2015, the value had reached just US$370mn.

With the reduction in anti-dumping tax now in place, Vietnamese shrimp exporters are forecasting a sharp increase in exports to the US for the remainder of the year.