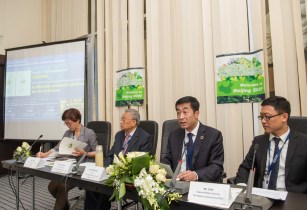 Yili Group, a state-owned company of dairy industry in China, has announced the world’s first-ever report on biodiversity protection at a conference in Egypt

The 14th Conference of the Parties to the United Nations Convention on Biodiversity is being held in Sharm el Sheikh in Egypt from 14-29 November 2018.

Representatives from more than 190 contracting states of the convention on biodiversity are participating in the event and having in-depth discussions on policies on biodiversity integration of agriculture, forestry, fishery and tourism.

Business development is closely bound to responsibilities. As the leader of China's dairy production, the Group has witnessed steady growth in revenue and net profits over the years. As of the third quarter of 2018, the Group has rung up sales of US$8.83bn, representing a year-on-year increase of 16.88 per cent, thereby proving themselves a leader in the industry. For the Group, being “first” means not only operations but also the assumption of social responsibilities.

Zhang Jianqiu notes that, apart from development, Yili is going ahead with the idea of “Green Leadership” proposed by Group Chairman Pan Gang and is pushing forward with the strategy “Green Industrial China.”

It is on this basis that the “Chinese Sample” of biodiversity protection has been produced gradually, characterised by “Disclosure, Management and Popularity” over the years.

The 15th Conference of the Parties to the UN Convention on Biodiversity will be held in China for the first time in 2020.