Food and agriculture to see major disruption in next decade 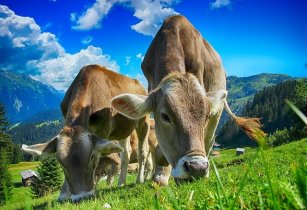 Technology is dramatically driving down the costs and driving up the quality of modern proteins, according to “Rethinking Food and Agriculture 2020-2030 – The Second Domestication of Plants and Animals, the Disruption of the Cow, and the Collapse of Industrial Livestock Farming” by RethinkX

Catherine Tubb, report co-author, said, “The industrial livestock industry is one of the oldest, largest and most inefficient food-production systems in the world.  Modern ingredients and the foods are about 10 times more efficient across the board – from land and water use, to feedstock consumption and energy use.”

Precision fermentation (PF) is a process that enables the programming of micro-organisms to produce almost any complex organic molecule. Its costs are dropping exponentially because of rapid improvements in underlying biological and information technologies. The cost to produce a single molecule using PF has fallen from US$1mn per kilogram in 2000, to about US$100 today.

By 2030, modern food products will cost less than half as much to produce as the animal-derived products they replace. At the same time, this production system has the potential to spur competition and fast iteration of products that are ever cheaper and ever better: more nutritious, healthier, better tasting, more convenient, and more varied, as long as open markets and nutritional standards are protected.

The report details the way different parts of the cow (collagen, milk, meat and leather) and the markets they serve will be disrupted separately and concurrently by different technologies and business-model innovations that overlap, reinforce and accelerate each other.

“The key to understanding the disruption of the cow is that PF only needs to disrupt 3.3 per cent of the milk bottle to bring about the collapse of the entire cow milk industry,” said Seba. “PF proteins are already being produced commercially. Costs are decreasing exponentially while quality and variety increase exponentially. Industrial cattle farming industry will collapse long before we see modern technologies produce the ‘perfect’ cellular steak at a competitive price.”

“This disruption is inevitable,” said RethinkX co-founder Jamie Arbib. “The positive impacts – from food security to climate – are profound.  But policymakers, investors, businesses and voters have some power over this disruption’s speed, scale, impacts, and who benefits. One of the first and most critical decisions is to ensure an open market place.”

Instead of growing a whole cow to break it down into products, PF designs and customizes individual molecules to build products. Development is done in a manner similar to the software industry: companies and individuals will build components within layers of the equivalent of a software stack that can be used according to individual needs. The food developer is like an app developer, using the stack that is most appropriate according to market needs.

All aspects of the Food-as-Software model are distributed: building biological parts databases (biobricks), designing molecules/ingredients, designing microorganisms to produce these molecules via PF, and designing molecular cookbooks to integrate them into end-user products. Like craft breweries, food producers will produce food locally, using locally grown feedstock. However, with the Food-as-Software system, they will download microorganism designs, protein designs, and molecular cookbooks from global databases.

According to Arbib, “We are still early in the disruption cycle, and projections are just that, but we believe our framework, methodology and findings are more accurate than those produced by linear models, which risk locking in expensive, obsolete, and uncompetitive assets, technologies and skill sets.”

“To unlock the full potential of this and every other technological disruption, we need to embrace an approach that better reflects the complex, dynamic and rapidly-changing world we live in.”

German Agriculture Society (DLG) and Alain Charles Publishing are working on a concept of an animal farming Hackathon to collaborate with the business and education community at large a identify challenges and come up with solutions for the same.