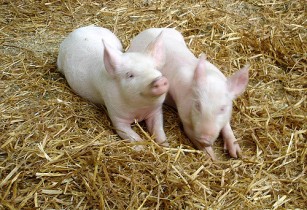 The Hypor Libra sow balances traits in piglet quality, mothering ability and sow longevity aims to increase the number of pigs that employees can manage and reduces feed costs from farrow to wean, said Hypor

According to a recent study by Ghent University, Hypor sows have the capability to produce large litters and achieve a higher weaning capacity due to the amount of colostrums that they produce.

“The Hypor Libra is capable of producing more than 30 full value pigs a year. Her piglets reach appropriate weaning weights in three weeks with minimal cross-fostering or relying on milk replacer”, Huisman further added. This reduces the amount of feed spent on having extra foster sows in the farrowing barn because the sow raises her own litter.

The Hypor Libra aims to produce uniform litters that increase the number of full value pigs that are sold to the meat packer. To develop a sow that produces uniform litters, Hypor collects the birth weight and 14-day weight of individual piglets. Individual weights of pigs are taken into account along with the variation within a litter and how that will affect the number of full value pigs.

Hypor collects data from more than 300 electronic feed stations worldwide to measure physical characteristics such as feed intake, growth and calculate the feed conversion ratio (FCR) and residual feed intake (RFI) of individual pigs. RFI aims to improve efficiency by comparing what the pig requires to the actual amount of feed consumed.