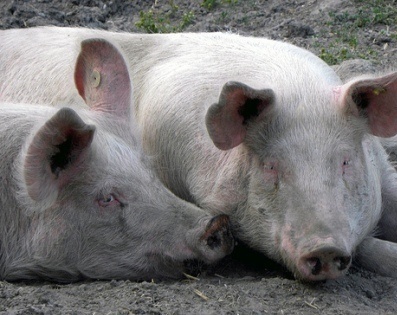 The strain was obtained from one area where swine and poultry mixed for breeding. The strain, called Xiny10, was isolated in 2010, in Henan province of China.

The strain was isolated from one sick swine whose clinical signs were characterised by progressive weight loss, fever and diarrhoea, in a group of post-weaned pigs of about nine weeks of age.

Comparative research indicates that the swine virus might be generated from the vaccine strain La Sota as it has been widely used as a live virus vaccine until now in China.

The isolated paramyxovirus, was proved to be Newcastle Disease Virus (NDV) through serologic tests and sequence alignment.

It was compared to another previous swine Newcastle Disease Virus (JL01), as well as with the vaccine strain La Sota.

They were compared on the basis of sequences of the whole-lengthen fusion (F) gene and biological characteristics.Xiny10 has great differences with JL01 in virulence, biological characteristics, genotype, and amino acid homology of F gene. The sequence alignment showed Xiny10 and La Sota shared 97.3 per cent to 98.7 per cent identities with genotype II NDVs, which was higher than these strains from the other genotypes.

NCD is a highly infectious disease that affects birds with a wide range of clinical signsAlthough the most significant impact of NCD is on chickens, other species can also be affected.