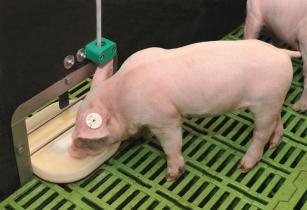 With the Nutrix piglet feeding system, the specialists from Lutten developed a world-first five years ago. Sow and piglet performance are increased significantly thanks to this fully automatic supplementary feeding system. As a result, sows lose less weight during the suckling period and piglets gain weight more efficiently.

The results in everyday operation speak for themselves: “One customer from Hungary has been reporting to us that their piglets have become up to 1.5 kilograms heavier since the Nutrix piglet feeding system was installed,” explained Ralf Meyer, head of development at WEDA.

One essential feature is that the filling level is monitored permanently throughout the day and minimal quantities (from 30 grams) of fresh feed are only dosed into the trough once the piglets have emptied it.

“As early as the day after birth, piglets can receive supplementary milk feed via the trough. After a very short time, all piglets adopt the system so well that milk quantities can be increased slowly and subsequently mixed with pre-starter feed,” summarised Ralf Meyer.

On the occasion of the system’s fifth birthday, WEDA equipped Nutrix with an optimised computer generation. “The positive result: with the new Excellent computer, small as well as large systems can be handled even more easily thanks to simplified operation,” imparted development head Meyer. Moreover, the new computer provides many useful features which have already proven to be efficient in liquid feeding. For instance, the dashboard was improved and reports as well as a maintenance schedule were added. In addition, automated distribution of these forms via e-mail is now very easy to handle.

Some of the additional Nutrix advantages include:

– Enzyme training for animals’ digestive tracts – from milk to cereals. When piglets are used to eating cereal in the farrowing area, feed intake on the flat deck is increased significantly.