Effects of acids on poultry production 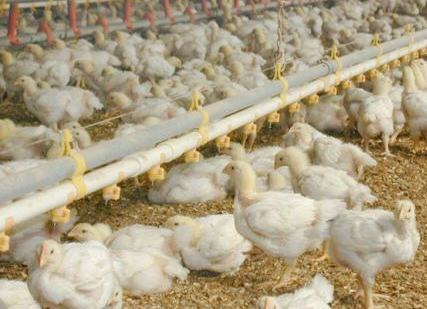 The application of acidifiers appears to have beneficial effects on poultry production. However, producers need to consider what they want to accomplish by using acids and whether those benefits will outweigh the cost of replacing damaged components

Over the past few years, experts in the poultry industry have given the use of acidifiers closer scrutiny. Putting weak acids in poultry feed and water and on the poultry litter in many cases appears to have beneficial effects. One of the first things a producer must determine when considering the use of acids: will the gain in production outweigh the cost of replacing components damaged by the acid? A producer, for example, had to replace all of the drinkers in his poultry house twice in less than a year because his acidification program was too aggressive. That cost him about US$4,000.

pH is a scale, ranging from 0 to 14, that measures how acidic a substance is. Anything with a pH below 7 is acidic; anything with a pH above 7 is alkaline. A pH of 7 is considered neutral. It is important to note that the pH scale is not a simple one-step measure. It is a logarithmic measure. This means lowering pH from 7.2 to 6.2 increases the acidity of the water by 10 times. Lowering pH to 5.2 makes it 100 times more acidic, and lowering to 4.2 is 1,000 times more acidic.

Producers originally began using acidifiers during the last few days of a flock. The acid reduces the pH in a bird's crop, making the gut less hospitable to bacteria. This, in turn, reduced the amount of contamination at the processing plant.

Many producers then began using acidifiers as agents to clean the drinking lines.

They would use it about once a week. Producers now are using acidifiers on a regular basis — often continually — to keep the pH of the water below 7. This acidifies the birds’ crops, as well as kills bacteria in the watering line.

Researchers also determined that chlorine used as a sanitizer is more effective when the water's pH is between 6.0 and 6.8.

Acids generally are categorized as strong or weak. Only weak acids should be used for poultry or livestock. And, weak acids can be either organic or inorganic.

Acidifiers are used in three ways in a poultry operation:

• Added to the poultry feed in a solid form. This fights mold development in the feed and reduces the pH in the birds’ crops.

• Sprayed onto the poultry litter. This attacks the bacteria that facilitate the breakdown of uric acid, limiting the amount of ammonia releases.

• Injected into the water to kill bacteria, facilitate chlorine in killing bacteria and lowering the pH in the birds’ crops.

Acids put into the feed tend to be less odorous and less corrosive. The downside: this type of acidifier comes in a solid or powder form and can be a severe irritant if inhaled.

Injecting acids into the water is the most problematic. Chlorine alone can corrode metal and plastic parts in the drinkers, causing them to leak or discharge too much water. Adding acid to the water simply compounds that corrosive process. Additionally, acidifiers usually are not a single acid, but a combination of two or more. This is because one acid may be effective on one type of bacteria but not on another. For instance, lactic acid is found to be a good bactericide for E. coli but a poor oxidizer of Salmonella, molds and yeast.

Bacteria also have the capability of becoming resistant to a particular acid. It is found that quite often producers who decide to use acidifiers will mix the material according to the manufacturer's instructions and inject it into their water without knowing what the water's pH is. That is simply an invitation for equipment damage and malfunction. (A note of caution: Never mix chlorine and an acidifier to make a stock solution. It will release a poisonous gas. If you want to use both chemicals, use a dual injector system.)

Another downside to using acidifiers is that they can promote the growth of algae and fungi in the watering system. These too can grow to the point where they clog drinkers and cause them to leak. They also may require additional chemicals to inhibit their growth.

Biofilm is also a factor to consider. Biofilm forms when bacteria in water attach to a solid surface. They begin to exude a sticky substance and quickly become an active colony of pathogens embedded in the slime.

Research has shown that chlorine, even chlorine boosted by an acidifier, is very ineffective at killing bacteria embedded in a biofilm. Once established, biofilm will grow to the point where it can inhibit drinkers, causing them to leak or preventing the birds from activating them. Portions of the biofilm also can break off and get into the birds during the drinking process.

It is recommended that producers use acidifiers only after very careful consideration.

Understand what you want to accomplish with the acidifier and know the pH of your water and how the chemicals will affect that.

It is also recommended that an alternative to chlorine and acids. Our research has shown that hydrogen peroxide, when properly formulated, is an excellent water sanitizer when used in conjunction with a regular programme to manage the drinking system.

To begin, make sure the water is filtered before it enters the poultry house. This will remove most sediment and inorganic material. Upgrade drinking system components as they become worn and maintain dry, or friable, litter conditions. Use an injector to put hydrogen peroxide into your water.

psi). Flush the system after each intervention of medication. Enclosed watering systems make a regular flushing schedule easy with the bypass valves on flush-through water regulators.

In between flocks, charge the lines with a hydrogen peroxide and water mixture, following the manufacturer's guidelines. Let it stand to allow the hydrogen peroxide to oxidize the biofilm, and then flush with pure water for at least a minute for every 100 feet (30 meters). This will rid your lines of biofilm and any sediment, reducing the need for harsher sanitizers.

Hydrogen peroxide breaks down into water and oxygen, producing no environmental hazard. Additionally, it does not harm the birds or impact the taste of the water. Sanitizing agents, such as chlorine, can alter the water’s taste to the point where the birds will not drink, hurting the feed conversion rate.