Globalstar Europe Satellite Services Ltd, a wholly-owned subsidiary of Globalstar, Inc. has announced that collars based on SmartOne C and SPOT Trace are being deployed in Mongolia and elsewhere in Central Asia to track horses, including high-value competitive racehorses 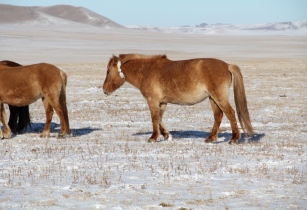 While the region’s horses typically do not travel more than 50km from home, they are known to wander hundreds of kilometres to find good grass. (Image source: Globalstar)

More than 30,000 horses are being safeguarded by 1,000 satellite-enabled IoT collars in Mongolia with deployments expanding widely into Kazakhstan, Kyrgyzstan and Tajikistan while trials are underway in neighbouring territories.

Demand for the latest collar from Mongolia-based Globalstar Value Added Reseller Spotter, built around the small SmartOne C tracker, has been unprecedented, with the number of total deployed Spotter units doubling in the six months since the product’s July 2019 launch.

Horses are part of daily life in Mongolia and horse racing is a major sport nationwide. However, with the sparsely populated nation’s 4.5 million semi-wild horses roaming fence-free, keeping tabs on the animals is a major challenge for owners. In response to market demand, Spotter was established with the aim to devise a tracking solution using Globalstar technology.

The first collar which Spotter developed is based on Globalstar’s SPOT Trace tracker, chosen as it was the most economical and effective technology and because its small size makes it easy to integrate into an IoT collar. Its ease-of-use, configurability - allowing the owner to choose the frequency of tracking - and fixed price for transmissions was also deciding factors. GPS trackers had shown inadequate reach in tests, and Globalstar was deemed better suited to meet users’ requirements than GSM mobile technology and satellite systems in geostationary orbit (GEO).

While the region’s horses typically do not travel more than 50km from home, they are known to wander hundreds of kilometres to find good grass. They can also get lost in high winds or while fleeing storms, occasionally going missing for months. Some never make it back to their owners, increasing the likelihood of theft.

The SmartOne C-based collar, with its longer battery life, is ideal for tracking far-roaming herds. If the owner receives tracking information six times daily, the system can deliver a full six months of tracking between battery changes.

Spotter’s collars transmit GPS locations over the Globalstar Low Earth Orbit (LEO) satellite network. Both types of collars are tough enough to withstand the daily rigours of horses ranging across challenging terrain, often in extreme weather (-40 degrees Celsius in some areas), as well as the rough-and-tumble of herd life. The horses typically roam in herds of around 30, with one lead stallion keeping the animals together and providing protection. As a result, the group can be effectively monitored with just one collar.

Enkh-Amgalan Ganbaatar, spotter co-founder and CEO, explained, “Requirements differ for tracking racehorses compared with ordinary horses, and depending on the location. Racehorse owners are eager to keep particularly close tabs on their valuable equines, so they appreciate the hourly tracking SPOT Trace enables. Meanwhile owners of family herds and those who use horses for transportation, meat and milk value the extended tracking duration and lower maintenance made possible through SmartOne C’s long battery life.”