Dr Lisbeth Riis, founder and CEO at Scarab Solutions, has explained how the cut flower industry can significantly benefit by replicating the principles of digital mapping of pests and diseases to the plants in their greenhouses 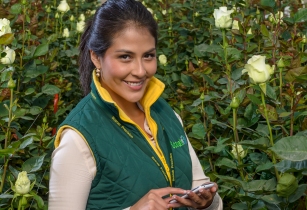 Pest and disease mapping in any environment has far-reaching effects. Thirty years ago, wild poliovirus was present in more than 125 countries and paralysed 350,000 people every year, primarily young children. Now incredibly targeted tracking and mapping efforts, combined with a global immunisation program by Global Polio Eradication Initiative (GPEI), have reduced the number of cases by more than 99 per cent, saving more than 13 million children from paralysis.

Lessons learned from human diseases can be applied to horticulture

It seems that while these advanced techniques are now prevalent for human diseases, not enough has changed in the cut flower greenhouses in Africa and Latin America, where a large amount of the world’s cut flowers are grown. Mapping of pests and diseases in horticulture is still often a manual, inaccurate and inefficient process relying on paper-based analysis and individual knowledge.

Typical farmers expect to lose five to 10 per cent of yield to pest and diseases, which is why effective control can greatly increase the number of plants sent for harvest in the first place. Not only do they benefit in terms of the total yield—but they can also better focus staff and resources on the farm and even limit wastage of pesticides and biological control agents.

With cut flower growing in such a competitive market, gaining a differentiating advantage is crucial. To manage pests and diseases, farms use a team of scouts to collect data on many hectares of greenhouses. But the same manual methods are being used to measure the effectiveness of pesticide spraying and coverage once a pest or disease problem has been found.

Using these manual processes to analyse data is complex enough in one greenhouse—let alone 20 or more, all of which will have their own unique factors impacting pest and disease control such as temperature, moisture and risk of physical damage.

Again, this is where useful parallels can be drawn with the medical world. In Nigeria, one of the three remaining countries facing Polio, teams would go from village to village in remote, rural regions of the countryside administering the polio vaccination—but would still rely on hand-drawn memory maps to record that data. People running the global immunisation program soon realised more effective mapping would help track and eradicate the disease.

Using satellites, GPS tracking and mapping software to create Geographic Information Systems, very detailed maps were produced from the data collected. Using this critical geospatial information, administrators could now see a more holistic picture showing where the outbreaks of Polio were, which villages were missed and the number of teams that had to be deployed to contain it. The same is true for tracking the effect of pests and diseases for cut flower growers.

Advanced mapping and analytics tools are now available to digitise a large portion of pest and disease mapping, tracking and control—changing how the world targets crop pests and disease. It is the analysis stage where mapping can unlock true value—monitoring scout effectiveness, measuring pests and disease outbreaks and gauging intervention success.

Three major benefits across the farm:

A digital GPS-based map will present a clear basis for problem shooting by correctly mapping out the extent of pests and diseases in an individual greenhouse. Take a disease such as Downy Mildew for example—which occurs in moist and poorly ventilated conditions. Firstly, early intervention from effective scouting can pinpoint the affected plants. By using scouting data to digitally map the greenhouse, farm managers can see the pattern of activity visually represented.

One of the cases witnessed by Scarab agronomists was the presence of a small amount of Downy Mildew in only some spots at the end of some rose beds in a particular greenhouse. On initial review, the farm manager was completely unaware to the presence to the disease in the house, but on inspection, it was found that poorly constructed downpipes spilled over water and caused the ideal moist conditions for this disease out of reach of the manager’s eyesight.

This is where effective decision-making comes in. If farm managers did not have this map, then things could easily get worse for them. They could run the risk of the disease spreading to other plants, with potentially catastrophic impact to total yield. Instead they can react accordingly—even putting preventative measures in the form of quality control of the farm’s works departments to protect plants from being at risk in the same way in the future.

Ecuadorian grower Naranjo Roses implemented a mapping system to manage Powdery Mildew, Head Botrytis and Downy Mildew—in a single year it managed to boost its number of flowers available for export by 7.5 per cent.

Another key area where effective mapping pays dividends is in the deployment of pesticide and biological control. As highlighted earlier, all greenhouse environments are slightly different—so pest and disease presence and proliferation will vary for each and every one. So, using the same volume and coverage of pesticide spraying across them all makes no sense. With an effective map, farm managers can target spraying to specific areas in specified rows, minimising the volume of pesticide used across the entire farm.

This level of excellent mapping, combined with an analytical tool, provides a cornerstone for biological control. One such biological control program at Equinox Horticulture near Mount Kenya in East Africa has benefited significantly from the improved information and analysis delivered by this technology. The company reduced its requirements for Phytoseiulus persimilis (a predatory mite) by 60-90 per cent, depending the season.

Better farm management – from the top down

The scale of a typical cut flower farm makes it naturally difficult to manage on an overall level—paper-based reporting makes it difficult to gain full visibility into pest and disease levels. Farm management can be revolutionised by using software to analyse these huge data sets and graphically represent an accurate view of every greenhouse. This software is available and is being used to great effect in many cut flower farms across the world – in fact, the Scarab Precision system, for example, is already implemented with 25 per cent of rose producers in Latin America and East Africa. Here’s how it works.

Every full scouting cycle from each and every greenhouse should be completed one to two times per week—tracking a whole range of pest and disease information. When the data is logged into a mobile device it becomes very easy to build an overall picture of the performance of the whole farm.

Daily reports containing key information are be delivered directly to the farm or crop protection manager—such as Spider mite presence, Downy Mildew, Powdery Mildew, Head Botrytis, Thrips and damage and much more. Not only does this allow farm or crop managers to track performance daily, but they can also dig deeper into particular focus areas dating back months or years.

They can then make data-driven decisions to focus scouts and farm workers on target areas and report accurate and up-to-date management information to farm owners. If they are working with an experienced solution provider who owns a wide enough dataset, they can even anonymously track their performance against the average data for other farms in their area.

Precise mapping puts farms in control of pests and diseases

It’s time for the cut flower community to allow digital mapping solutions to take their operations to the next level. Those who don’t act quickly risk being left behind, leaving money on the table, owners frustrated and a workforce unguided.

When it comes to yield and cost control, we all know that just a few percentage points either way can make a huge difference to a farm’s bottom line.