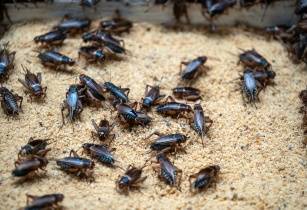 Singapore-based alternative protein company INSEACT officially opened the doors to its facility in Singapore today, in a ceremony attended by government representatives alongside investors and industry partners

After receiving the keys to the completely empty site in September2021, INSEACT completed construction and equipment installation and set up production and R&D activities in only 4 months, while remaining 10% under budget. According to the company, In just the first few weeks of ramping up in December 2021, the colony produced 60 million insects.

INSEACT specialises in producing sustainable insect protein for aquaculture, starting with shrimp farming. It uses waste from palm oil operations as a raw material to feed the insects. Its cutting-edge solution enables a fully circular economy by redirecting waste streams from palm oil production away from carbon-emitting landfills to be bioconverted by insects.

The new facility is operated by INSEACT’s team of eight employees, half of whom have extensive prior insect protein experience. The facility adapts engineering technologies used across other manufacturing and farming industries to lay the foundation for large scale expansion of its operations. The facility’s processes run on an amalgamation of machinery and equipment sourced internationally, including from the Netherlands where the insect industry has grown a steady footprint this past decade.

Michael Badeski, COO, said: “The past twelve months have seen INSEACT go from zero to one, as the first step of our roadmap was achieved by transitioning our protein production from an idea to an operational reality. Last January, the company had no employees, only partially secured seed funding, and neither Tim nor myself were located in Singapore. Today, we are producing insect protein from the most advanced and fastest-built insect pilot facility in Singapore.”