VOG, the South Tyrolean Consortium, shipped a container of apples to Vietnam for the first time on 5 March 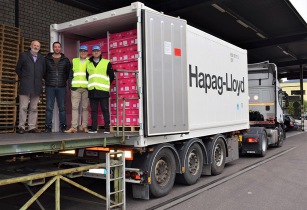 Negotiations with Vietnam began at the end of 2015 and the process has inevitably been lengthy. (Image source: VOG)

The eight tonnes of apples will be distributed through the Asian country's biggest retail circuits.

Negotiations with Vietnam began at the end of 2015 and the process has inevitably been lengthy, due to the need to agree with phytosanitary conditions and pass a large number of preliminary inspections.

Alessandro Dalpiaz, general director of Assomela, said, “The successful opening of this new sales channel is also thanks to our colleagues in the Ferrara CSO and all the Institutions, from the provincial authorities to the Ministry of Agriculture, the Italian Trade Agency and the Italian Embassy in Hanoi, whose constant support to Assomela in these difficult negotiations enabled us to achieve our goal.”

“At what is definitely a difficult time for international trade, the importance of this result reaches beyond the apple industry alone, to restore faith in the markets and the potential for business between even very distant countries. Overall, it was a success based on teamwork, which will soon also be extended to include Taiwan and Thailand,” Dalpiaz added.

“We view the Vietnamese market with great interest,” VOG sales manager Klaus Hölzl explained. “It has very high potential and we are committed to working hard to build the trust and partnerships necessary to win over consumers, and also to overcome some remaining criticalities in the protocol.”

In the meantime, the first container of VOG Consortium apples has already left and will reach its destination in just over a month, enabling local consumers to enjoy Italian apples and savour “bites” of South Tyrol – Südtirol of the very highest quality.