Laser sorting machines can eliminate the risk aflatoxins in foods 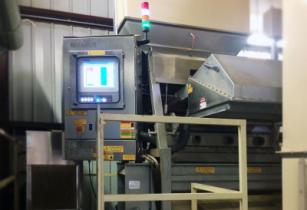 TOMRA, food safety technology provier, has launched near infra-red (NIR) spectroscopy, fluorescent lighting and advanced lasers to analyse and identify the extremely low intensity of light reflected by aflatoxin mould and fungus in a variety of food types, enabling the detection of aflatoxin contamination

Food contamination by aflatoxins, which can cause cancer, is worrying scientists and regulators. New concerns about these naturally-occurring poisons, voiced earlier this year by scientific advisors, have provided a stark reminder of the health risk to consumers and the commercial risk to food businesses.

Aflatoxins are 68 times more lethal than arsenic and capable of seriously damaging human and animal livers. Aflatoxins can cause fever, malaise, and anorexia, followed by abdominal pain, vomiting, and hepatitis. Worse still, chronic toxicity from aflatoxins can reduce immune efficiency and trigger cancer, which is why they are classified by the World Health Organization (WHO) as a Group 1 Carcinogen. Exposure to aflatoxin-contaminated food is known to have caused hundreds of deaths in India and Kenya and many more fatalities have probably gone unreported. Even in Europe, where there are strict rules about food safety, in 2013 several nations reported widespread aflatoxin-contamination of milk.

The most poisonous type of aflatoxin, B1, occurs naturally in a wide range of foods. This fungus infects cereal crops including wheat, plus walnut, corn, cotton, peanuts and tree nuts. Aflatoxin B1 also infects spices, crude vegetable oils, figs, other dried fruits, cocoa beans, and rice. Another type of aflatoxin, M1, can be present in milk taken from animals which have eaten feed contaminated by aflatoxin B1. Pasteurisation of the milk does not protect against aflatoxin infection.

Aflatoxins are not harmful to humans or animals if consumed in small doses, but aflatoxin-intake from food and milk does have to be kept low. This is why, in many parts of the world, maximum permissible levels of aflatoxins in food are defined by law. If regulators find these levels exceeded, the business responsible pays a heavy price. In addition to the expensive disruption of a product-recall, there is the likelihood of costly and possibly fatal brand damage.

Recognising and disposing of aflatoxins

TOMRA’s sorting machines aim to employ unique biometric signature identification (BSI) technology. BSI works by detecting the biometric characteristics of the food items it scans - for example, nuts and raisins - and compares these to features stored in the machine’s database to determine whether the items should be accepted or rejected. This detects and removes smaller defects than is possible with conventional spectral technology. Detection accuracy is so good that false-rejection rates are exceptionally low and yields exceptionally high.

An example can be seen in action at Nestlé Group’s processing line in Dongguan, China, run by sub-brand Hsufuchi Foods. Quality and safety are one of the ten corporate principles at Nestlé, which has chosen TOMRA as its strategic partner in fighting aflatoxin contamination in peanut products.

Zhang Ahfung, deputy general manager in charge of production at Dongguan, said, “TOMRA’s technical support was very efficient and quick in response, both in the test phase and after machine installation. Through many tests we are now assured that TOMRA’s Helius sorter can effectively control the level of aflatoxin in peanuts. This puts my mind at ease, because I do not have to worry about our product quality any more. Now we will consider implementing a Detox-technology-based sorter in all facilities where aflatoxin problems arise.”