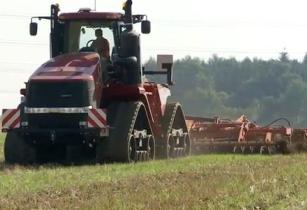 The trophy was awarded because of the innovative concept of the new Case IH Quadtrac series.

The new Quadtrac series, presented at Agritechnica for the first time, is one of the first high performance tractor series to fulfil the tightened Tier 4 Final/Stage IV emission regulations with an SCR-only system.

Quadtrac has four individually driven, oscillating tracks that reduce compaction and provides better floatation and traction in the field.

All Quadtrac tractors have been powered by the new FPT Industrial Cursor 13 engines. This six-cylinder power source, with a capacity of 12.9 litres and two intercoolers, enables a significant improvement in the thermal efficiency of the engine.